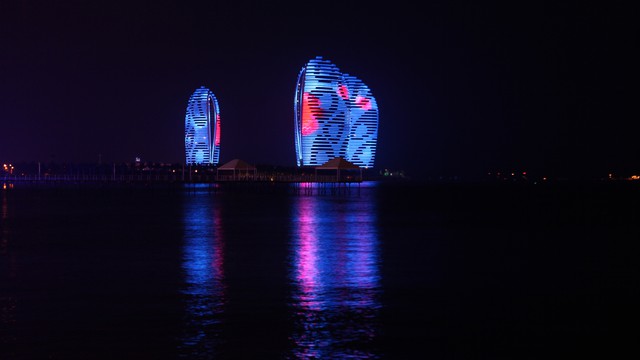 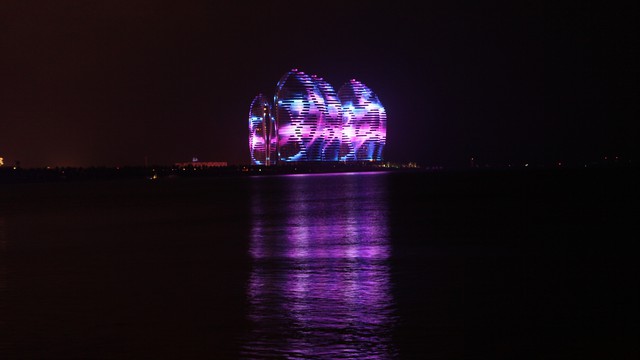 Five creative buildings constructed on a man-made island in Sanya Bay, create an amazing atmosphere in one of China's most famous beach resort locations. A creative façade inspired by the Tianyá Haijiao ("Edges of the heaven, corners of the sea") rock formations of south Hainan Island; the façades utilizes integrated direct view LED lighting to enhance the visual architectural features of the building and ensure its presence into the night.

Approximately 40,000 m² of digital façade light the harbor of Sanya Bay. The five buildings constructed on Sanya's Phoenix Island have become a tourist attraction in their own right. Utilizing nearly 32,000 linear meters of Daktronics FreeForm PSX-125 LED elements, the owners have created a vibrant landmark that sets Sanya Bay apart from the rest of Hainan Island. With the South China Sea as its backdrop, the project first grabs your attention from your seat as you approach by airplane to Sanya International Airport, and then again as you drive along the coastline where it is viewable for several kilometers. Installed horizontally and integrated seamlessly into the curtain-wall design, the direct view LED elements are spaced vertically at alternating spacing of 1.5 meters and 1.8 meters. Some of the elements are installed nearly 360° around the façade of each building, while other lines are disconnected to highlight some of the physical architectural features designed for enhancing the daytime texture of the façade. Driven by Daktronics DMP control system, the dynamic animated content is able to move amongst the buildings seamlessly to enhance the impact of five individual buildings into one incredibly large canvas. The sheer size of the vibrant media façade is only enhanced by its glistening reflection in the nearby waters of the South China Sea. Whether viewed from your hotel on the coastline or a yacht at sea, the installation remains a beacon that can change the environmental feeling of the entire harbor.

Facade type and geometry (structure) : The façade's balconies have a pattern of clear and colored curtain wall glass between the handrail and floor. The handrail is a custom designed extrusion to house the LED elements while concealing the cables and mounting brackets. At the ceiling of each level and on the vertical features, a similar custom designed extrusion houses the LED elements.

Luminace : Low Brightness -- façade is being used starting at dusk.

Urban situation : The buildings are on a small island, so there is 360 degree viewing from long distance.

Description of showreel : The 5 buildings can show content independent from each other, or they can be used as one large screen.