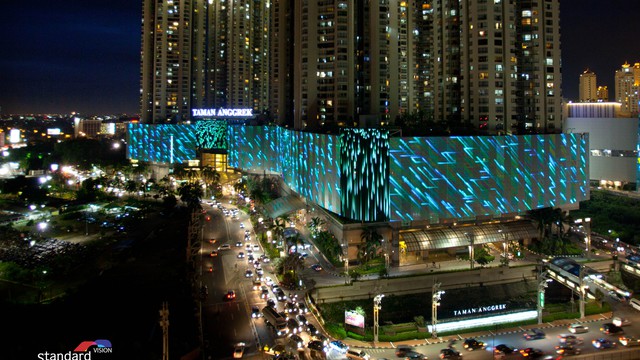 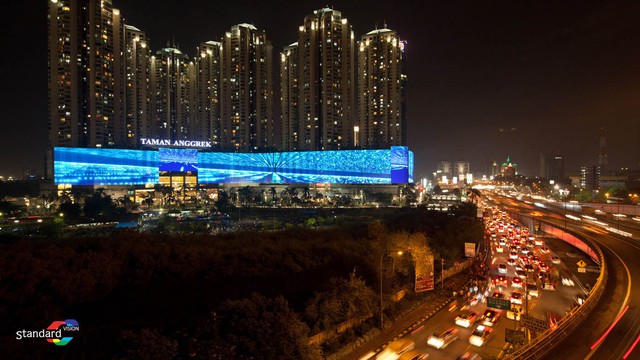 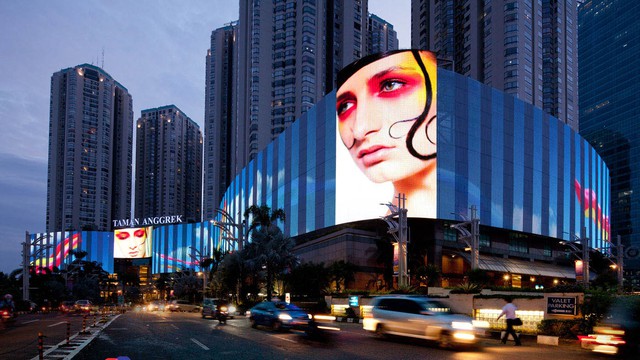 For this 2010 commission, StandardVision was tasked to design a digital skin to wrap a mixed-use development to take advantage of its prime location intersecting two major highways. The client wanted the installation to serve as a massive digital canvas on which to display public art on a grand scale. The design challenge was to provide a face-lift to a 15 year old development via the creation of the world’s longest LED media façade, stretching 25 meters in height and over 354 meters in length, winning recognition from the Guinness Book of World Records. The media façade covers over 28,447 square meters. The design solution involved the creation of a screen combining both high and low resolution display areas, with 28,152 aluminum “blades” (each approximately 2.5 meters in length, which, if placed end-to-end would span almost 70 kilometers), into which were fitted over 8,500,000 LEDs, providing horizontal image resolution of over 3,000 pixels. The media façade is situated approximately 15 meters above the ground and can be seen by hundreds of thousands of people each day. The project took 16 months to realize, from initial commission to final testing, with operation commencing December 2011. The content plan calls for public art to be showcased on the entirety of the lower resolution portions of the screen, with advertising featured on the smaller, high resolution sections.

Urban situation : Viewing angles of 50 to 120 degrees. Minimum viewing distance is 15 meters (as pedestrians walk under the façade). The media façade can be seen from more than 10 kilometres away.

Description of showreel : Video art and generative art from local and international artists, as well as advertising.