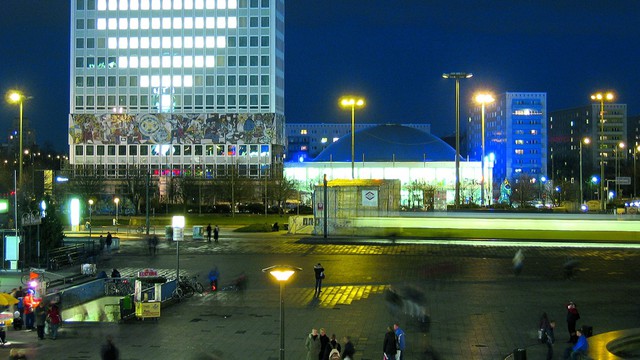 Celebrating its 20th anniversary the Chaos Computer Club has made a special present to itself and the city of Berlin. From September 12th, 2001 to February 23rd, 2002, the famous “Haus des Lehrers” (teacher’s house) office building at Berlin Alexanderplatz has been enhanced to become the world’s biggest interactive computer display.

“Blinkenlights has been planned and build in record time. We had only four weeks from the first thought to the display of the first movie. So we managed to be ready on prime time: the 20th anniversary of the Chaos Computer Club making a present of huge dimensions to both the Club and the town of Berlin. Blinkenlights consists of 8 floors with 18 windows each. Behind each window there is a single lamp on a self-made tripod. Each lamp is connected to the power source via a relay. If the relay switches on, the windowpane becomes bright. In order to achieve the appropriate self-illuminated effect we have painted all windows white. The lamps have a capacity of 150W only. Each relay is connected to the eighth floor via a control cable. There, all the cables come together in a huge thread connecting to the Blinkenlights Chaos Control Center. An amplifier provides the cables with the necessary power to switch the relay. The control computer is capable of switching each relay independently. This is where Blinkenlights Movies become reality. Overall, we had laid out around 5000m of cable in the house. Three computers control the whole system. Although it would have been possible to put it all in one system, we decided to separate the modules (control, playback, telephone interactivity) in order to allow distributed development and operation. The modules communicate via network protocols.”

Luminace : Low luminance. Operation during the night is only possible.

Urban situation : In the centre of Berlin. Big viewing distances are possible and necessary.

Description of showreel : The content has been created by the users through simple interfaces that had been programmed by the Blinkenlights crew (play pong, blinkenpaint, loveletters).