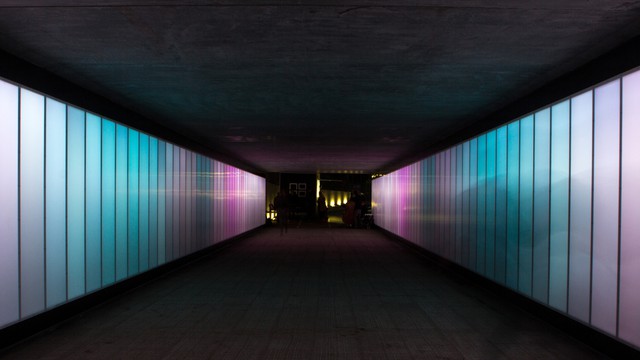 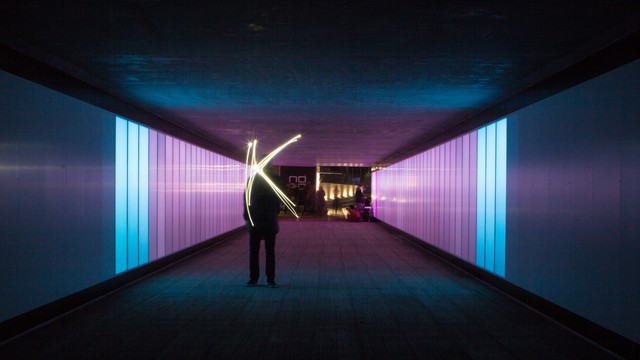 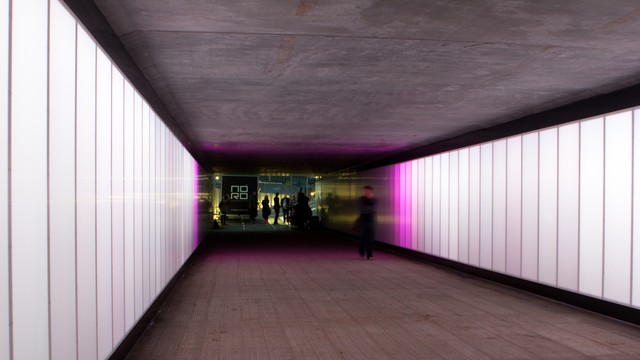 In March 2014 design office Kollision won the competition for designing a new interactive tunnel for Design City Kolding, Denmark. Kollision named their winning proposal ‘Interference’ based on the idea that urban life is characterized by two opposing trends: an urge to belong and be part of a community and an opposing desire to be alone and anonymous in the middle of the rush. This shaped a dynamic and interactive lighting concept integrated in the tunnel walls that focus on the meeting between people walking through the tunnel.

The 36 meter long tunnel for pedestrians and bicycles in the middle of the campus connects Design City Kolding and a new campus area. To create a dynamic experience for the users in the tunnel, a number of motion sensors are installed to continuously sense where there is movement in the tunnel. This creates several light scenarios: When one enters the tunnel, the movement activates a space of light in front of the person that follows the person through the tunnel. The light shuts down behind the person leaving the tunnel in darkness. If more people enter the tunnel a dynamic temporary space of light will apear between them making people aware of their interference and the surroundings. An important component in the control of the lighting design in the tunnel is the underlying software that translates the sensor data into a dynamic experience. Kollision has developed a number of software components that collect, interpret and communicate sensor data, while other parallel processes shape the rules for how the light sources respond to people in the tunnel. Movement in the tunnel is sensed by infrared light sensors hidden in the base structures of the tunnel walls. These signals are processed by a series of custom-made circuit boards that convert the sensor's simple signals into data packages, which are calculated in the central micro-computer (Raspberry Pi) responsible for controlling the light sources.

Facade type and geometry (structure) : A steel structure is mounted on both sides of the concrete tunnel. This creates light boxes where the light fixtures, sensors and hardware are integrated. The steel structure is covered by panels of white Lumino creating an even and simplistic look.

Kind of light creation : Standard RGB LED light fixtures are installed at the top of the steel construction. The fixtures are then covered by Lumino panels creating a defused evenly distributed light across the entire Lumino panel.

Resolution and transmitting behaviour : Low resolution - 120 9x3W RGB LED fixtures are integrated in the steel structure and covered by 120 220x60cm Lumino panels creating large dynamic colorful pixels. Sensors hidden in the base structure sense movement from bypassers and activate the light. The movement creates explosions of light that follow the person through the tunnel creating a temporary space of light around the person.

Luminace : Medium brightness - the light is turned on 24 hours a day and is the only tunnel illumination.

Urban situation : The tunnel connects two parts of the city and can be entered from either side of the tunnel. When the tunnel is empty the light spreads out from the tunnel creating an inviting atmsphere in surrounding areas.