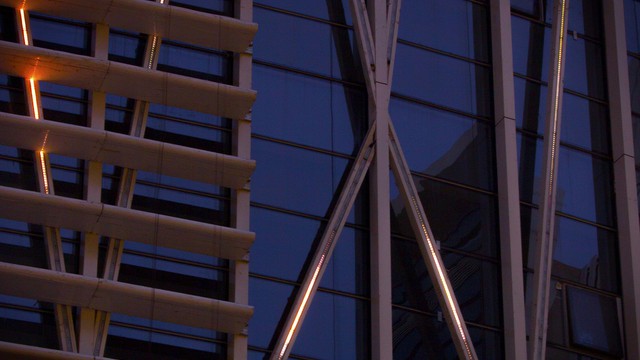 A commercial city in the east, revitalizes its tradition of dealing with light and media in its new architectural landmark located in the booming district of SG Highway. First raditional Islamic stone screens (Jaali) have taken a new avatar with a playfully extruded aluminum box section façade. Second the Hindu architecture’s story telling stone/wooden relief sculpture façade has donned a new avatar as digital media LED lights integrated into the façade's sun screen elements. The result is a beautiful animated play of light by sunlight during the day which transforms into a translucent highlight of LED media lights by night. During the week it feels like the façade is enjoying a gentle breeze, in weekends and during fourteen national holidays it dances in joy.

What do you give to a beautiful city of the past, transforming mindlessly with garish billboards, unplanned glow signage and glazed buildings who has forgotten its traditional wisdom dealing with sun and media? The old part of the city is famous for its islamic sun screen and Hindu sculptural façades. This traditional elements are climate responsive and culturally engaging. Both have been lost, when the city started to grow rapidly. The approach for Mondeal Square building is this to use sunshade screens on over 5000 square meters with integrated linear media LED lights. The lights have been custom designed to fit the varying length of diagonal lines and fitted with custom designed press fit mounting clamps in screen box sections. The box sections were customized to keep the LED media bars flush with the profile and thus become totally integral during the day. The dynamic shape and varying screen pattern was a challenging task for programming and content design that aligns and flows with the architectural form. However, the team's technical dexterity and contextual design approach resulted into an excellent site specific content. The final media content connects with people by expressing breeze visually on the building. It is enjoyed the most at night after a hot day. The contents are more of a festive nature during weekends and festival days. The innovative content design of the media façade is an attempt to unite various religions by responding with artistic content for their festivals and negating the overuse of billboards in city.

Facade type and geometry (structure) : Front façade with office space behind is made of aluminum sunscreen and glazing. Fixed and operable glazing is shaded by deep horizontal fixed louvers supported by vertical and irregular diagonal members, all made of custom aluminum extruded sections. Rear façade has straircase and services which has punctured brick masonry and is again further shaded by thin aluminum louvers.

Kind of light creation : Linear LED bars of 1000mm, 500mm and 250mm lengths were fitted in diagonal elements of the sun screen. The profiles were chosen for compactness (32X35mm) and ability to carry data and power cables at the same time. The diagonal elements were designed to retain the LED profile flush to the surface. The profiles were press fitted within custom designed clamps that hold and let data and power cables pass.

Resolution and transmitting behaviour : Linear media bars have 48 RGB LED dots per 1000mm. Each LED is individually addressable to show a smooth movement. Pixels are oriented away from the interior glazed walls to avoid disturbances at offices behind the façade.

Luminace : The façade is white and reflects light smoothly by day and night. Medium brightness LEDs were chosen to be visible from far yet to be comfortable from near vision. Installation is limited to the diagonal elements of the sunscreens. The façade lighting is being used only after dusk till 11pm throughout the year.

Urban situation : The building is situated at the cross roads of booming cultural (Anand nagar road) and commercial (SG Highway) streets of around 30m and 60m widths respectively. The curved form of the media façade offers visibility from far away even when traveling parallel to it. Although, unplanned public streetlights and bright billboards around do not remain out of notice.

Description of showreel : The façade displays only artistic contents and is strictly not to be used for any commercial use. At present it has different contents for weekdays, weekends and individual festivals of major Indian religions.