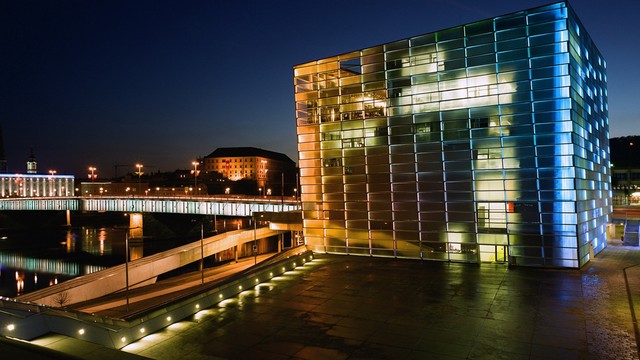 The existing Ars Electronica Center and the new extension are connected to form one unit to be perceived as an ensemble. The crystal-like appearance generates a homogeneous interaction with its surroundings, at the same time becoming a distinctive landmark.

The AEC is one of the main cultural hotspots in Linz. The aim of the design was to wrap 2.000 m2 in existing buildings and 4.000 m2 in new buildings with a uniform and multi-purpose building envelope that forms a remarkable, shiplike-prismatic silhouette on the bank of the Danube.The urbanistic concept is based on the principle of a dialogue with its surrounding. In consideration of urbanistic important conditions, like the preservation of the wide view over the Danube as well as the conservation of the historical ensembles, an attractive ambience will be generated.A construction consisting of steel and glass connects the existing Ars Electronica Center with the main and supply building. The partly transparent and partly matt laminated glass paneels are illuminated from the back with space in between. During the day skylight windows, serve as a natural ventilation for the offices lying behind. For the lightning of the façade artists from all over the world can insert their programs through an interface.The crystal-like appearance generates a homogeneous interaction with its surroundings, at the same time becoming a distinctive landmark.Each of the 1.100 glass slabs of 3.6 m width and 1.15 m height represents one pixel of the whole light performance. The detailed frontage elements with built in LED-bars are individually selectable and make changes of infinitely variable color and brightness values (RGBW) possible. This novelty in Europe is initialising new possibilities of compositions for artists. The Ars Electronica Center presents another feature from this innovative technology – the possibility of demonstrating pure white. The AEC becomes – at the push of a button – a white crystal. The light is projected with LED bars sideways into the glass plates. They are installed vertically on one side of the window pane so they integrate invisibly into the façade.

Facade type and geometry (structure) : The main building and the extension are both encased with a structure made of steel and glass. This construction makes it into one single architectural unit - a crystal, comprised in the performance.

Kind of light creation : The partly transparent (VSG clear glass) and partly matt laminated glass panels (VSG with master POINT) are illuminated from the back space in between: 40.000 LEDs lighten a 5.000 m² large building cover and produce an exciting play of light and color at night.

Resolution and transmitting behaviour : Each of the 1.100 glass slabs of 3.6 m width and 1.15 m height represents one pixel of the whole light performance.

Urban situation : The urban concept is based on the principle of dialogue between architecture and environment with due consideration to important factors, such as preserving the view across the River Danube and protecting the surrounding historic buildings, in order to create an attractive ambience.