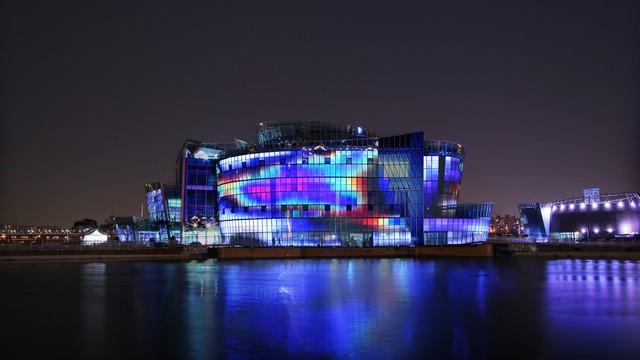 Designed to bring two sides of a vibrant city together, the Floating Island complex makes perfect use of the architecturally unused expanse of the Han river in Korea's capital, to present a floating flower by day and a flotilla of flickering lanterns by night. Cutting-"edge" LED lighting from Galaxia Electronics pumps a burst of life and multi-media colour into the heart of Seoul.

Like many cities of the world, Korea's capital, Seoul, straddles a major river. In Seoul's case, the Han River, which for centuries has served as an indispensable artery to the city - but which also divides the city into two. As part of the city's Han River Renaissance project, the Floating Island was set up to stimulate this huge expanse of water, to give character, culture and colour, but also a shared landmark to both sides of the city. The project, as the name suggests, consists of 3 interlinked illuminated floating island constructions, including a convention hall, an entertainment hall and a media art gallery, as well as a giant 1.000" motorized LED screen. The total building area covers 9.995m2 and was designed to create a blooming flower effect, with the individual islands representing a seed, a bud and a petal. This is underlined throughout the construction elements by the choice of glass, wood and steel as building materials. Whilst already a daytime landmark, it is at night that the complex really comes to life, providing viewers on both sides of the river, as well as on the islands themselves, with a spectacular display of colour and light against the contrasting black backdrop of the Han river.