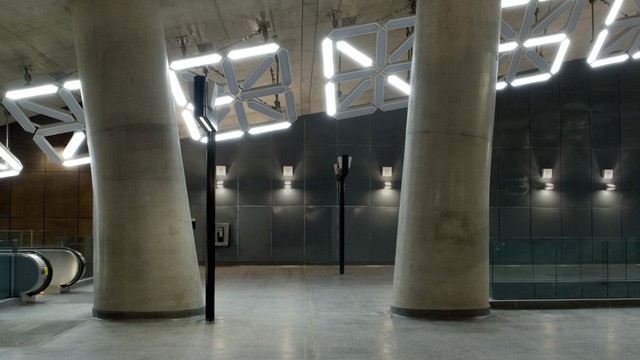 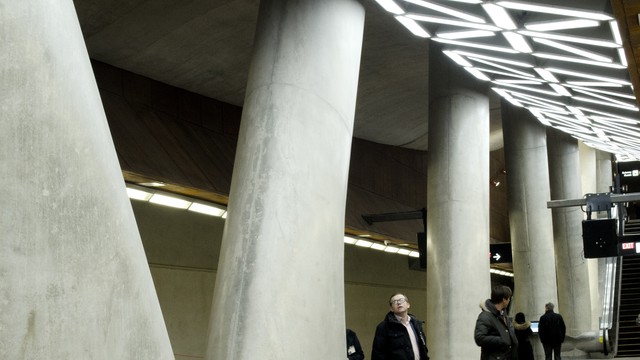 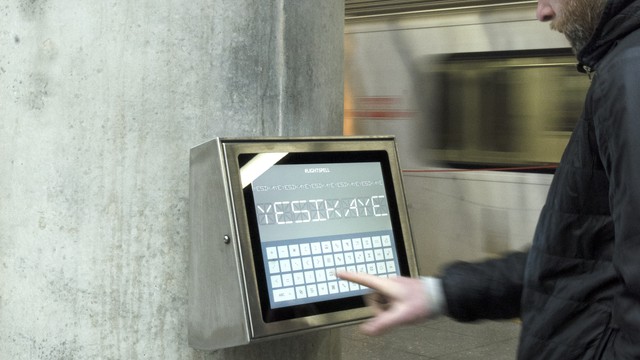 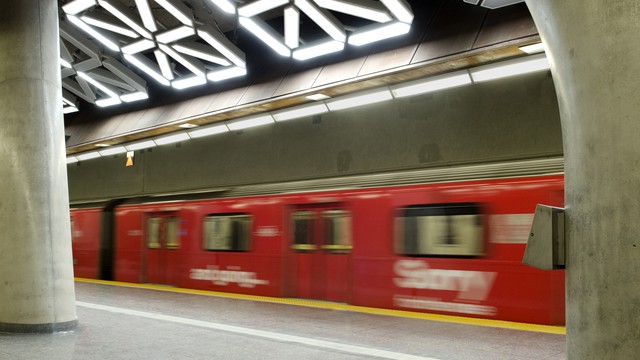 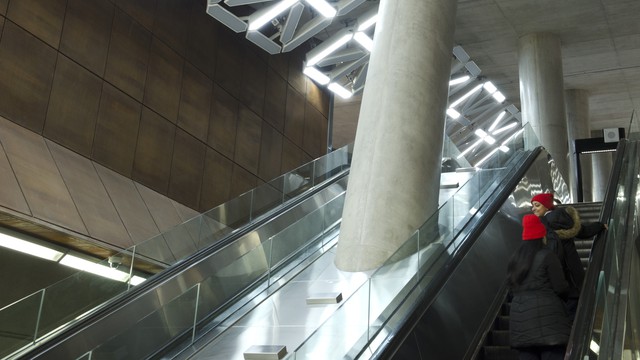 LightSpell is a hybrid between art installation and functional indoor lighting. 40, large-format, 16-segment displays form an undulating band of chandeliers across the entire length of a new subway station in Toronto, designed by architect Will Alsop (aLL Design). On the one hand, the installation provides light for the station; at the same time, it displays text messages that passengers can create at several touchscreen terminals located on the station platform. The artwork transforms the public space of the subway station into a site of reflection of the increasingly digital public sphere that opens up new spaces of action for the individual and for dialogue within and across communities.

The installation LightSpell is an oversized text display, ca. 130m long, that hangs from the ceiling of the Pioneer Village subway station in Toronto. The display consists of an undulating band of 40 special chandeliers. Each individual lamp forms a 16-segment display typical of the early phase of digitalization in the 20th century, on which letters, special characters, and numerals can be shown. Placed along the entire length of the station, 6 keyboard terminals are available to passengers waiting for their trains. There they can enter symbols and words that appear directly in the light installation as a repeating chain of characters. No matter what sequence of characters is displayed, the system regulates their illuminating power to keep the brightness on the station platform constant. LightSpell is an experiment on open-ended communication and interaction in the public space. A central theme is the definition of public space in a situation in which new digital means of expression increasingly and significantly extend the range of communication of each individual within public spaces. The system was designed to not exercise any form of technical censorship of the input contents, hence every conceivable combination of letters or characters can be entered, with the resulting “text” appearing instantly above the heads of everyone on the platform. The passengers are the only public corrective. Some messages will remain for seconds only, others might remain visible for days. Every passerby has the opportunity to overwrite, correct, ignore, or answer. But however different the messages may be, there is one unchanging constant: whether witty, intelligent, or meaningful, whether senseless, stupid, or insulting, whether read and understood or overlooked by all – each utterance inevitably becomes the platform’s illumination and thereby serves to fulfill a basic need.

Description of showreel : not applicable

Community or communities involved : Following a selection process for public art for the Pioneer Village Station, realities:united were selected as public artists by the "Pioneer Village Station Art Design Review Committee" (ADRC). All stakeholders, such as the nearby York University and the TTC (Toronto Transit Commission), were involved in the process of developing the artwork. Furthermore, a Public House Event was organized to discuss the artwork and to answer all questions from the public. Since the censorship of LightSpell in December 2017 (for more information on this please see 39 - Comments) a broad social discourse about freedom of expression in public space has evolved and is still ongoing in regional and national press and social media.

Issues addressed : Besides practical issues about form, design and interpretation of LightSpell, there was a lively and controversial discussion about the topics of free speech and freedom of expression. Another issue was the general duty and function of state-owned associations. What do they have to provide? What are their liabilities? etc.

Impact : The outcome of these discussions has been integrated in the client's and realities:united's working process.

Next steps : not applicable