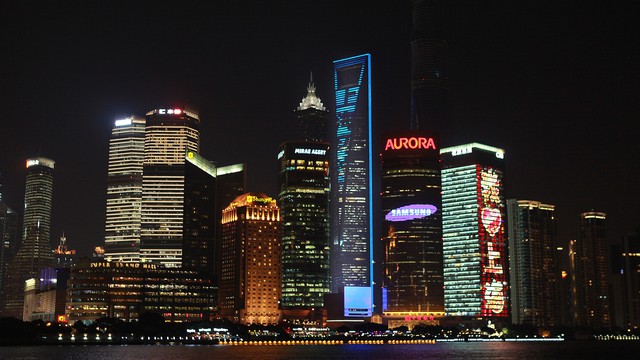 Iconic in the futuristic skyline of Shanghai’s Pudong District is the towering Shanghai World Financial Center. It was the 2nd tallest building in the world at its opening in 2008, and for the fifth anniversary wanted to create an architectural spectacular that would maintain its presence in the rapidly changing cityscape. By creating a dynamic digital medium it communicates directly with the millions of residents and visitors of the massive city.

Highlighting the physical aspects of the SWFC, direct view LED lighting elements were utilized from the 55th floor to the top of the building at 492 meters, to create the world's highest known dynamic media façade. This world-renowned building, currently 7th tallest in the world, was designed by Kohn Pederson Fox, and developed by the Mori Building Company of Japan. It has drawn people to Shanghai since 2008, and in celebration of their 5th anniversary, launched a project to finally deliver on the lighting concept originally designed by Japanese Motoko Ishii Lighting Design. An area of over 10,500 square meters on each of the southeast and northwest facing façades, plus the entire perimeter of the building, are covered by 4,684 linear meters of Daktronics FreeForm PSX-62 direct view LED elements installed on 4.2 meter vertical spacing. The long viewing distances experienced by spectators are in excess of 1 km and allow for the image to be blended in spite of the large spacing between the elements. Viewable at nearly 20 km away, the SWFC has the ability to communicate to millions of people daily. Not intended as an advertising medium, the dynamic façade is used to communicate artistic or other impressionistic full-color images to illustrate the building within the skyline. For the 5th anniversary celebration, the owner commissioned several renowned digital artists from China, Japan and Spain, to create content that was also accompanied by augmented reality apps that could be used on spectators’ mobile phones. In an effort to enhance the impact of the façade, they primarily run their trademark blue color the majority of the operating time and unleash the artistic content on special events and holidays.

Resolution and transmitting behaviour : Low Resolution -- LED elements are integrated onto the fins of the building. The LEDs do not reflect off the fins or the building. The left and right side building outline are each 3,472 pixels tall and the roof-line is 1,152 pixels wide. There are also 22,432 pixels on the front and rear faces which is symmetrical.

Urban situation : The building can be seen 360 degrees from several kilometers away

Description of showreel : Not intended as an advertising medium, the dynamic façade is used to communicate artistic or other impressionistic full-color images to illustrate the building within the skyline.