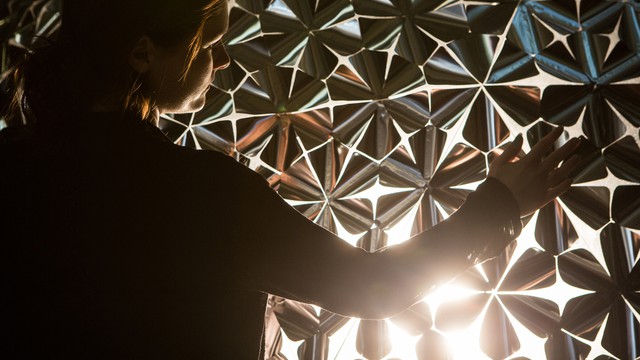 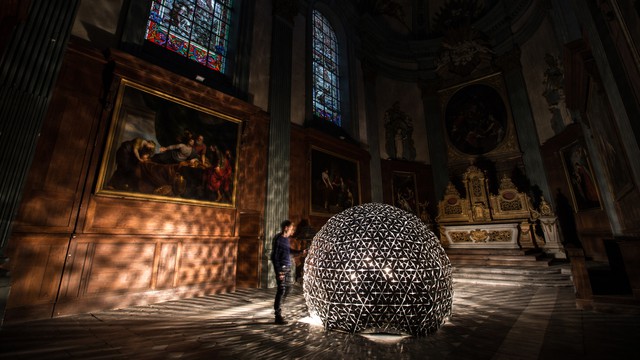 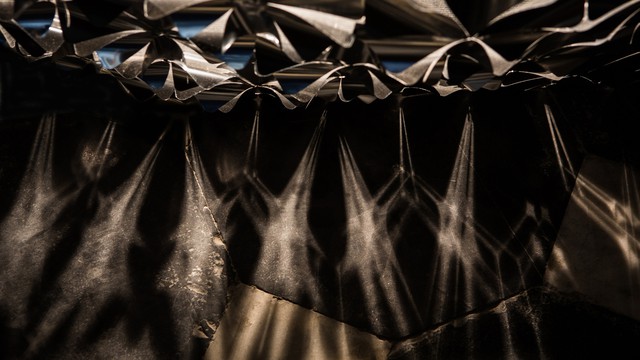 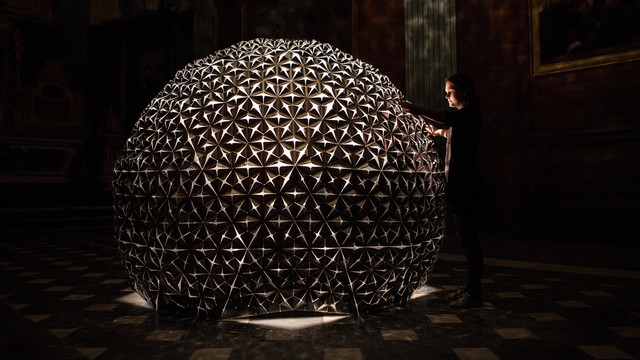 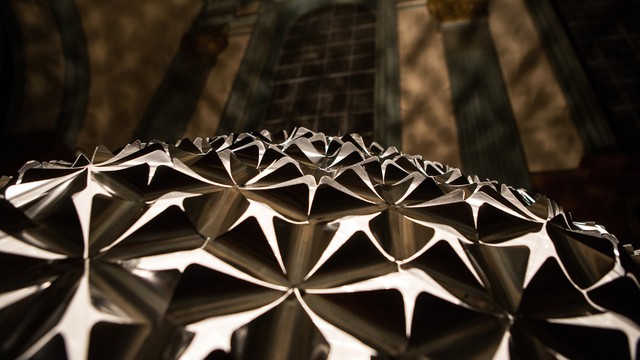 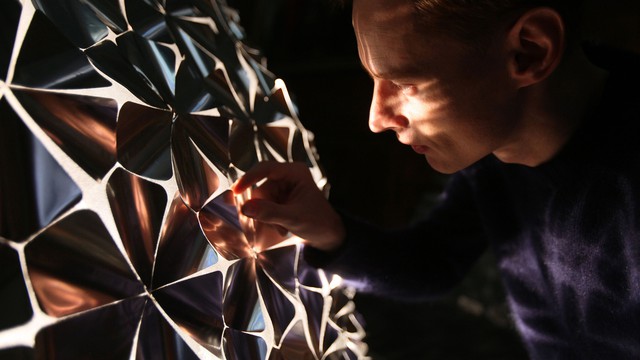 Lotus Dome’ is a living dome made out of hundreds of ultra-light responsive aluminum flowers. When approached, the big silver dome lights up and opens its flowers. Its behavior moves from soft breathing to a more dynamic mood when more people interact. The light slowly follows people, creating an interactive play of light and shadow. The graphic representations of the lotus flower on the walls and the deep bass sound transform the Renaissance environment into a ‘Techno-Church’.

The smart Lotus foil is specially developed by Studio Roosegaarde and their manufacturers, and is made from several thin layers of Mylar that fold open and close when touched by light. This high-tech craftsmanship is similar to the innovative thinking of the church’s architecture of the 16th century. Roosegaarde: “We’re updating Renaissance, applying a high tech layer that makes the architecture come alive”. ‘Lotus Dome’ is created for the city of Lille and it’s locals. The purpose was to activate the beautiful but deserted Renaissance building, and make the architecture become more alive and contemporary. This dynamic relation between people and technology is what Roosegaarde calls ‘Techno-Poetry’. “Lotus Dome functions as a mediator, connecting elements of architecture and nature, of the past and the future”. The city of Lille commissioned artist Daan Roosegaarde to inspire the inhabitants and experience their city in a new way. ‘Lotus Dome’ can be visited free of charge until 13 January 2013 in the Sainte Madeleine Church for the exhibition FANTASTIC by Lille3000. Studio Roosegaarde is the social design lab of artist Daan Roosegaarde. With projects ranging from fashion to architecture, he creates smart and social designs that instinctively interact with sound and movement. Roosegaarde exhibited at the Tate Modern, the National Museum in Tokyo and has won the Dutch Design Award.

Facade type and geometry (structure) : Allround façade made from flowers, made from several layers of Mylar.

Resolution and transmitting behaviour : Six bright light bulbs are placed onto a moving standard, which can turn 360 degrees, as well as up and down. The lighting is programmed to trace and follow people. If they stand still in one site, the lamp goes up, opening the flowers on the top. When more people interact, the lamp turns wildly.

Urban situation : Placed inside the Marie Madeleine Church in Lille, it can be seen 3 months during festival Lille3000 FANTASTIC.