A new façade for the Galleria department store 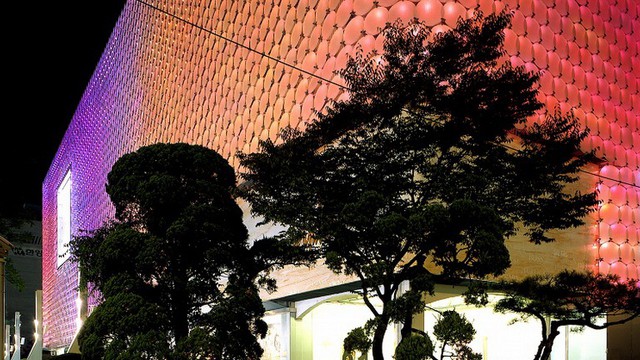 People stop in the street speechless, taking photographs and videos of the façade, all of them utterly amazed. The design’s subtle color changes and abstract images fit perfectly in the contemporary image of the building. The Galleria Fashion Mall is back in the heart of the city.

The Galleria Department Store is, in fact, a refurbished project. Originally the Galleria Building was a drab concrete box before. Its owner, Hanwa Stores Co., decided to turn it into a landmark building that reflects the innovation and style of the area. The building now manifests its own identity for quality, in the same way as the exclusive boutiques within its walls are doing. Architects UNStudio were asked to recreate the mall’s exterior. They introduced Arup Lighting as the project’s light designers. Together they developed a chameleon-like façade that reflects the subtleties of natural light on opalescent, dichroic glass discs during the day. At night the discs are individually backlit and controlled by a video software. In order to create brilliant and unique color schemes all over the building. Each disc is acting like a big pixel on a giant screen. 4.330 discs, each 850mm in diameter, make up the entire façade of the mall. “The subtle daytime looks of the building change to something expressive and outgoing during the night”, says the lighting designer Rogier van der Heide.

Resolution and transmitting behaviour : Low resolution - 4500 LED fittings cover mainly two sides of the building. At daytime, due to the 3M dichroic film, the building has an extraordinary appearance while the façade is not lit.

Luminace : Medium: the operation of the façade starts at twilight.

Urban situation : Because the building is situated at a street corner, only two of its façades can be seen. They can be viewed from a long distance.