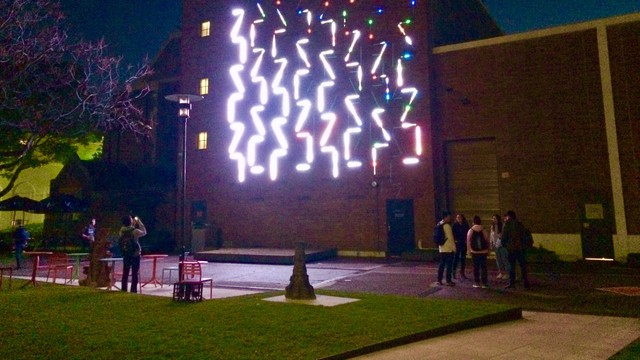 The Dash Wall is a fully programmable low-resolution LED media façade designed for The University of Sydney's Camperdown campus, in Sydney, Australia. It is the centrepiece of the recently launched Footbridge Gallery, the first project under the University's strategic placemaking initiatives, situated nearby the pedestrian bridge over Parramatta Road - one of the busiest entrances to the University campus. It consists of 120 RGB LED light bars carefully mounted to fit the pre-existing brick facade of the historical Holme Building. It can be fully programmed with commonly used rapid prototyping software, regularly taught to students introduced to creative coding and made interactive to respond to external sensors in real-time.

The Dash Wall is a fully programmable low-resolution media facade recently designed by design researcher and media artist Dr Luke Hespanhol for The University of Sydney's Camperdown campus, in Sydney, Australia. It consists of 120 RGB LED StrongLED CV3F light bars embedded on an existing brick facade of the historical Holme Building, which can be programmed with commonly used rapid prototyping software development environments such as Java and Processing, regularly taught to students introduced to creative coding. It can also play standard videos, pre-programmed effects, and respond in real-time to external sensors. Additionally, the system has also been connected to the pre-existing security lamps on the surrounding precinct, which can be automatically turned on or off in tandem with the media facade operation. The Dash Wall is the centrepiece of the recently launched Footbridge Gallery, the first project under the University's strategic placemaking initiatives, following recommendations from a study conducted by Gehl Architects in 2016. Situated nearby the pedestrian bridge over Parramatta Road - one of the busiest entrances to the University campus – the Dash Wall represents the first permanent outcome of this program, driving the broader revitalisation of the historical precinct it is located at, which includes eventual pedestrianisation and regular cultural events, with the goal of making it more inviting, safer, and turning it into a new cultural precinct in Sydney. Within the University context, The Dash Wall has been designed as a public-facing platform for ‘learning and research on display’, providing critical public infrastructure for prototyping and showcasing of works by local students and researchers. More broadly, it is envisaged as a hub for display of dynamic, experimental creative content by artists from any location, pioneering in Australia the emerging model of urban galleries found elsewhere in the globe.

Building or project owner : The University of Sydney

Structural engineering : Campus Infrastructure and Services, The University of Sydney

Facade construction : Luke Hespanhol, with support of Campus Infrastructure and Services, The University of Sydney

Project co-ordination : Luke Hespanhol, with support of Campus Infrastructure and Services, The University of Sydney

Facade type and geometry (structure) : The Dash Wall is a low-resolution media facade, built as a 21st century new skin to the brick facade of an old building. Light bars have been assembled on top of the bricks and to match the pre-existing patterns in the physical built architecture. The resulting geometry is a flat facade made of 8 columns (one per DMX universe), each with 12 RGB LED bars connected in series on a zig-zag pattern.

Pixel distance : About 3 cm (within each bar). Distance between indiviual bars vary from 1 cm to 20 cm.

Urban situation : Outside historical brick facade of Holme Building, at Science Road, in the heritage quarters of The University of Sydney's Camperdown campus, the oldest in Australia, and near one of the busiest entrances to the campus. The media facade has been designed to become an urban gallery, open to content submitted by local students, researchers and artists.

Community or communities involved : Initially, local students and researchers at The University of Sydney, particularly in Design, Architecture and Arts degrees, with progressive involvement of external artists and communities surrounding the University campus.

Host organization : The University of Sydney

Issues addressed : (a) Safety and occupance of a core area of the University campus. (b) Underutilisation of public spaces within the campus. (c) Lack of platforms for showcasing learning and research outcomes on the fields of illumination design, data visaulisation and light art. (d) Lack of integration and access between the University and surrounding communities.

Impact : Despite being in operation for only about 3 months, the Dash Wall and associated interventions (including new sitting furniture and landscaping) have already strongly increased occupancy in the area. A cross-disciplinary steering committee has been established, with the appointment of a curator. A calendar of public events is currently being organised.

Tools developed : Software framework (developed in Processing) for basic programming and maintenance of the facade. The software and running environments are accessible via wi-fi network, enabling remote management and real-time integration with other systems and data sources.

Next steps : (a) Content creation platform: development of web application to enable content creation by artists and members of the public, regardless of coding proficiency. The app has already been fully designed, and development is currently underway. (b) Integration with other media platforms in the precinct, including an outdoor projector, speakers and light poles.