If These Walls Could Talk... 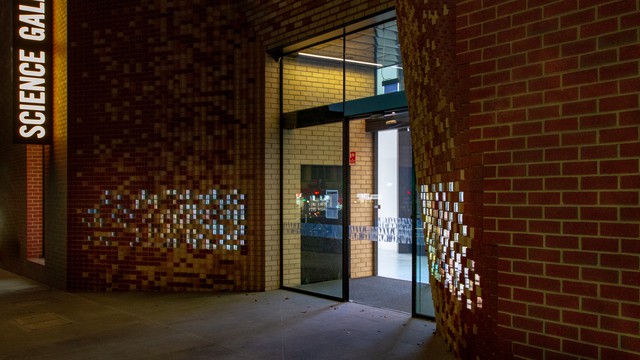 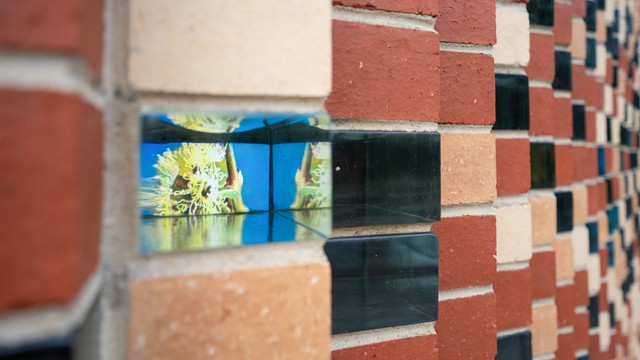 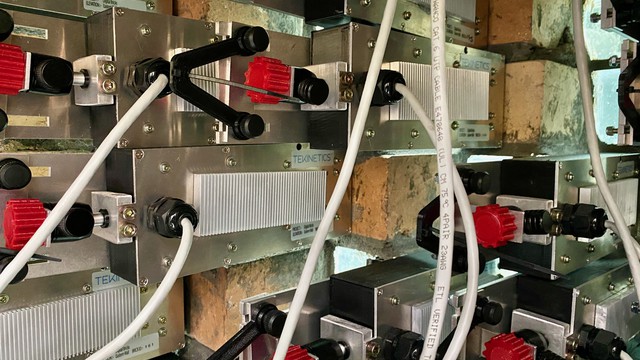 Inspired by the tactility and expressivity of clay bricks, The Digital Bricks at Science Gallery Melbourne fuse technology and architecture with Australia’s Indigenous culture using the world’s highest resolution interactive display. As polished translucent glass bricks and high-definition screen technology interlace with clay brickwork, the building façade now becomes an ever-changing canvas for digital data and interactive media. The rich history of the former hospital that occupied the site and the many stories of people that have had interactions with this urban area have enabled the notion of “if these walls could talk”. It is a nod to releasing historical and cultural narratives to the broader community. The Digital Bricks allow the walls to talk for decades to come by sharing stories of scientific innovation, First Peoples knowledge, and art programs by way of a high-tech, highly integrated, touch-responsive and carefully curated architectural media façade.

For centuries, clay bricks have shaped the appearance, feeling and expression of the built environment. Melbourne Connect, the newly built innovation precinct at the University of Melbourne, celebrates the traditional material by intertwining its physical and tactile strengths with opportunities afforded by today’s digital and interactive technologies. As the gateway to the precinct and its anchor tenant Science Gallery Melbourne, The Digital Bricks present a speculative outlook onto a future era of digitally augmented architectural building blocks. Guided by the precinct’s brick podium and its heritage references, The Digital Bricks encompasses the interlaced placement of 226 polished translucent glass bricks within the building’s clay brick ground floor structure. Each glass brick sits in front of a small, high-brightness and high-resolution LED screen. The project effectively creates a transparent mosaic of so-called 'digital bricks', placed strategically by way of a parametric model that feathers glass bricks with clay bricks and ensuring optimal visibility from children and adults. The technology behind The Digital Bricks is specifically designed for the building and is a result of design research by Science Gallery Melbourne and the School of Computing and Information Systems, in partnership with Melbourne Connect. The Digital Bricks, the world’s highest resolution interactive video screen at 208 physical megapixels, is without precedent. Façade engineers devised reliable methods to embed screens in wall cavities and building teams invented new ways to bond clay and glass bricks, while electronics engineers ensured finger taps were detected through solid glass and graphic designers seized the project’s unprecedented demand on computer graphics cards. The project’s complexity necessitated significant innovations and developments across all disciplines. The debut content program consists of The Digital Birthing Tree, a First Peoples-led content program that displays gradual transitions from pre-colonial knowledge to Western colonisation and occupation of Traditional Lands. The story provides an opportunity to honour Aboriginal women’s contributions to the health system, including at The Royal Women’s Hospital which formerly occupied the site. These stories embed Aboriginal and female perspectives into the fabric of the building. But they also reflect upon lost and threatened ecosystems and the impact of colonisation and innovation and unpack the site’s recent history as a hospital site. Future content programs will align with Science Gallery seasons and activities. Public participation in content design will also be enabled through creative engagement with the media facade's API.

Building or project owner : The University of Melbourne, Melbourne Connect

Facade type and geometry (structure) : Individual glass bricks on the facade’s exterior serve as lenses for LED screens housed within the wall cavity. The glass bricks are integrated into the traditional handset brickwork façade at the entrance to the precinct. Technical features include continuity of the thermal insulation to achieve GreenStar rating, thermal and structural compatibility of clay and glass bricks, and cavity access to maintain LED screens and connections.

Kind of light creation : The glass bricks provide remarkable optical properties of their own, which were embraced as part of the project design. Due to their offset installation, glass bricks provide a prismatic effect, effectively obscuring views onto the lit screens at certain viewing angles. Second, reflection and refraction of the glass bricks give the screens a magical, mesmerising, pseudo-holographic effect when viewed from different angles. As the screens broadcast content, the soft glow that emanates from the wall is so unexpected that one is compelled to look right up close and into them and explore the stories that this wall tells.

Resolution and transmitting behaviour : 226 polished glass bricks, each illuminated by a bespoke rear-mounted high-definition LED screen in a custom-fabricated enclosure. Individual LED screens have a resolution of 1,280 by 720 pixels, effectively delivering a complete digital canvas totalling 208,281,600 active pixels. Once spatialized to accommodate façade scale and brick layout, content is rendered at a resolution equal to approximately 845,447,418 megapixels.

Luminace : Each LED screen is capable of delivering 1,500 nits at a maximum energy draw of 25W. At this luminance level, the installation is viewable both during the daytime and at night. Light sensors external to the installation allow for real-time adjustments of screen luminance in response to ambient light levels.

Urban situation : Melbourne Connect is situated in the Melbourne suburb of Carlton, immediately adjoining Melbourne’s Central Business District. The area is known for its 19th-century Victorian architecture, garden squares, and the University of Melbourne’s main Parkville campus across Swanston Street. Melbourne Connect is built on the site of the former Royal Women’s Hospital in Melbourne. The site carries enormous local significance as many Melburnians have connections to the site through family and friends’ births. The site also fulfilled an instrumental role in enabling medical innovation as part of the University of Melbourne’s research in medicine and health sciences since the early 1900s. The newly developed innovation precinct provides office space to academics in various faculties and schools, with the Faculty of Engineering and Information Technology being the primary tenant.

Description of showreel : The façade's debut content centres around First Peoples knowledge. The content brings to life photographs of several thousand artefacts from the University's cultural collections of Indigenous significance and reflecting scientific innovation in the fields of engineering, medicine and biological sciences. Photographs are algorithmically manipulated, such as by way of neural style transfer to create visual connections between disparate image collections and instil a sense of intrigue and ambiguity among onlookers. Reflective of traditional smoking ceremonies, vapour animations overlay the visualisation and create a warming and healing environment.

Host organization : The University of Melbourne