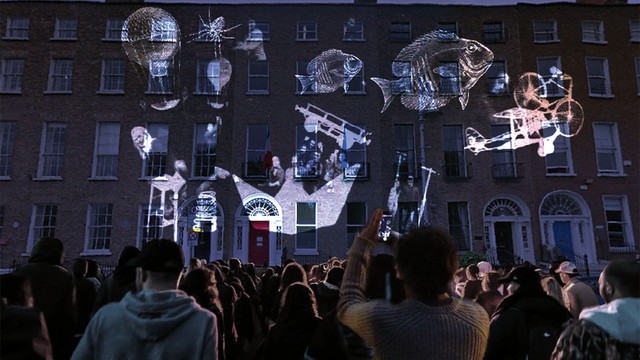 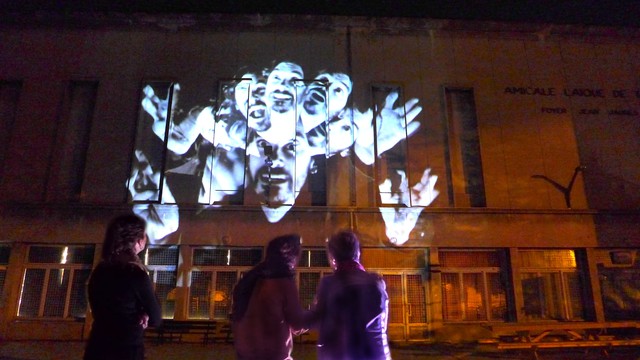 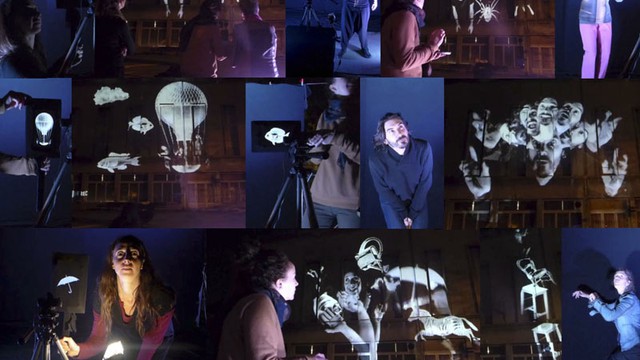 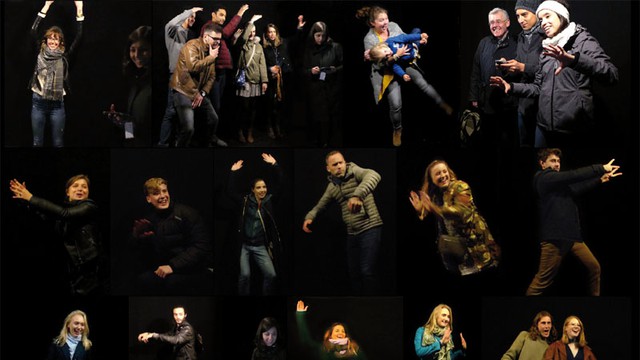 This interactive artwork can take place in front of the facade of a building during the night in order to become a giant interactive mapping in the urban space. Synergies is an interactive, collective and performative digital artwork installation renewing the approach of the video mapping. The artwork’s software enables creating in real time infinite narrative scenes by manipulating several “video elements“ and “image elements“: the generative and participatory bricks of the installation. Synergies offers a simple and singular mapping: A video projector projects the software’s images on a wall, a building facade or any other space . Real and virtual images are mixed together.

Synergies proposes to build imaginary mechanics: it allows improbable and random meetings between people, situations and objects. These virtual and imaginary mechanics evolve with people’s interactions. This interactive and collective artwork is able to bring spectators together in unpredictable stagings. Synergies offers a space of expression and abstraction. The work’s device enables people to interact all together. It is easy and accessible to everybody. An interaction space is facing to the videoprojection. It consists of a camera and a staging space with a black background. In the area of interaction, the spectator can: either use a digital tablet, to pick an element from the image library, to show it in front of the camera, and then to film and stage it. Static or animated visual elements are suggested in this library: moving characters (walking, running, jumping, manipulating etc...), objects like bouncing balls, umbrellas, books, candles, etc... or natural elements like animals, plants, etc... either be a new element on stage by filming himself in action for a few seconds. He can choose to show only his hands, his face, his full body or make any other proposal.It makes so many ephemeral chain (actions) reactions possible, evolving along with the public’s creative ideas. After some time, we all clear it up to let people create a new scene. The sizes and the orientations of the elements can be easily modified with the artwork’s device: for example tiny characters can be in front of huge objects. All static or animated visual elements are part of a large corpus of real and imaginary graphic objects. Mixing all these elements can create infinite virtual mechanics. The stories to be invented can be enriched by all these items. The “video elements“ have different durations and are played on a loop. Each one plays independently an act of the work. The totality can be arranged with several possibilities in order to create scenarios in constant transformation. The evolving scenario of this creation offers participants a large part of improvisation. In this creation, everyone’s cooperation contributes to the production of a collective artwork. This freedom of action benefits our participatory and interactive artworks. The result always offers unexpected moments of emotions. When too much elements are placed by the visitors, the scene can easily be cancelled in order to let the space empty for new proposals. The artwork is constantly renewed throughout the exhibition’s duration. Each experience of the artwork is always different.