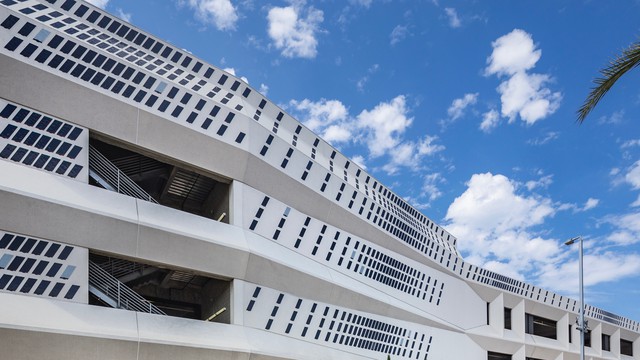 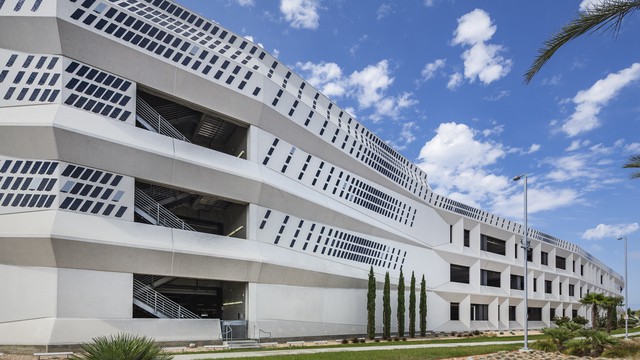 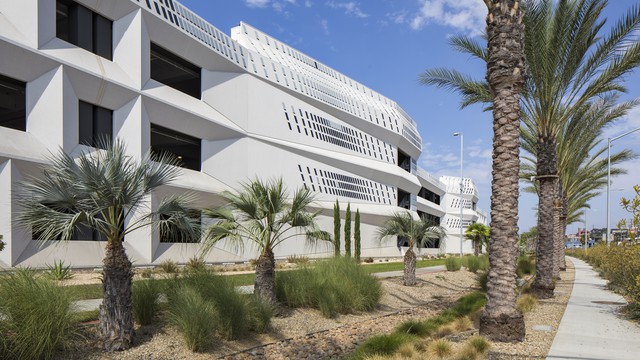 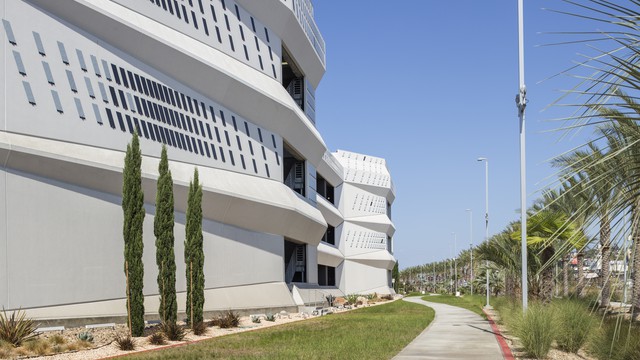 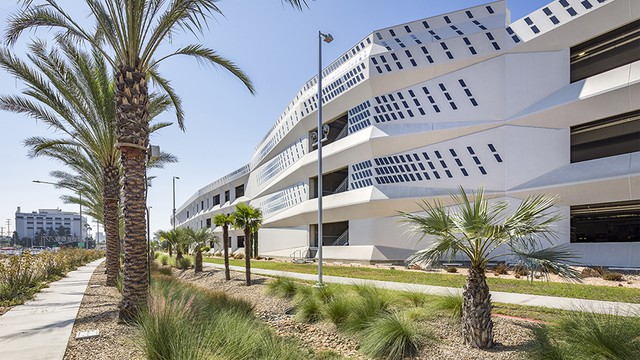 DAZZLE is a mediatecture art piece transforming the half kilometer long façade of the San Diego airport rental car center into an animated landmark mural.

What is DAZZLE? DAZZLE is an original, permanent public artwork commissioned for San Diego International Airport’s Rental Car Center. Artist team Ueberall International conceived of an iconic, site-specific artwork design that responds to the unique faceted façade and brings the structure to life. The artwork features more than 2,000 tiles of a revolutionary material similar to the technology found in handheld e-readers but adapted for an architectural scale. It is inspired by Dazzle camouflage, a type of ship camouflage used in World War I, developed by Norman Wilkinson and tested in the waters around San Diego. The artwork features custom, dynamic animations created by Ueberall that are displayed across the half-kilometer long façade of the Rental Car Center. How was the idea conceived? After exploring different artistic strategies for achieving a major visual impact, the artist team decided to apply dazzle camouflage to the gigantic façade. They were inspired by the historic form of ship camouflage which hides objects in plain sight by visually scrambling their shapes and outlines. This phenomenon is seen in nature with zebras and some wild cats. The artist team experimented with different ways to execute a geometric camouflage pattern. The breakthrough came with the idea of applying e-paper technology to the façade, turning it into a gigantic canvas for dynamic pixel animations. The e-paper tiles are articulated in a parallelogram shape and arranged in algorithmic distances to each other, to create an overall dynamic visual effect, even when the pixels are still. The graphic patterns are animated by a library of short loops evoking water ripples, moving traffic, dancing snowflakes to shifting geometries. Many of these animations are generated from particle animations, others are derived from actual footage like Eadweard Muybridge’s galloping horse from 1878, which was the first film ever produced. How does it work? The physical components of DAZZLE include 2,100 autonomous E Ink Prism™ tiles, strategically placed wireless transmitters, and a host computer. Each tile is integrated with a photovoltaic solar cell for power, electronics for operation, and wireless communication to create each unique animation developed by the artists. Each tile has its own unique address to enable precise programming of countless visual patterns. The host computer stores and coordinates all the animation programming for the tiles. Information is then transmitted from the host computer through Ethernet wires to wireless transmitters that face the building. The wireless transmitters forward the information to clusters of tiles which further forward data to other tiles. Each tile will individually transition from black to white based on the instructions it receives. The host computer will coordinate the activity of each tile.

Resolution and transmitting behaviour : The physical components of DAZZLE include 2,100 autonomous E Ink Prism™ tiles, strategically placed wireless transmitters, and a host computer; Prism is an E Ink product line specifically designed for the architecture and design market; DAZZLE is the first major installation of such magnitude to use Prism film; Each tile is integrated with a photovoltaic solar cell for power, electronics for operation, and wireless communication.

Urban situation : The DAZZLE art piece is located on the exterior of the new Rental Car Center (RCC) at the San Diego International Airport and is seen daily by hundreds of thousands of motorists on the adjacent Inter-state 5 Freeway connecting San Jose to Los Angeles.