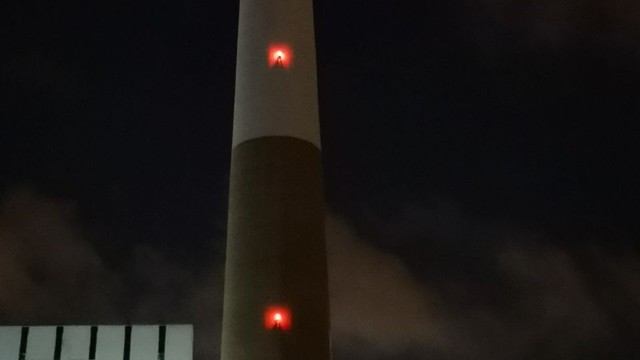 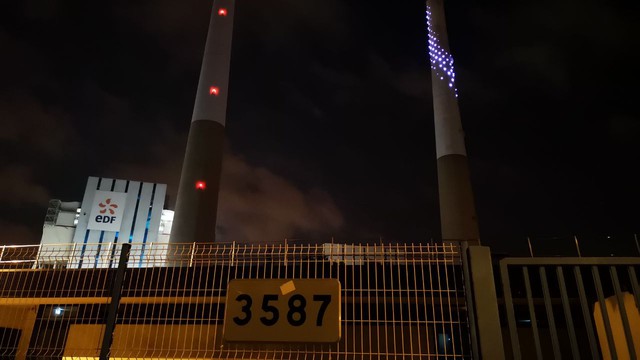 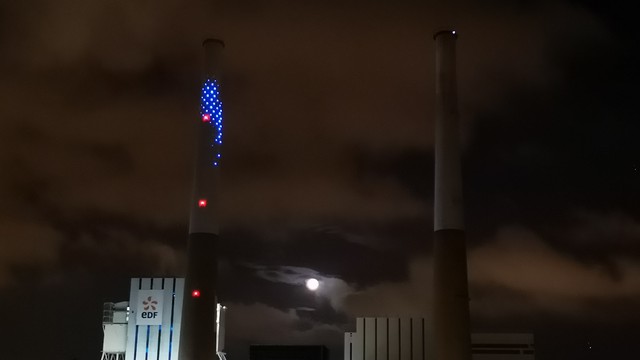 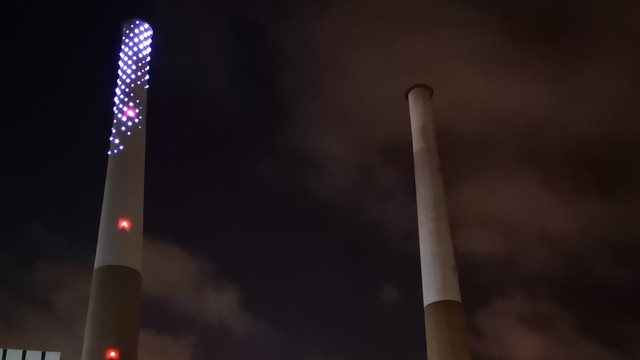 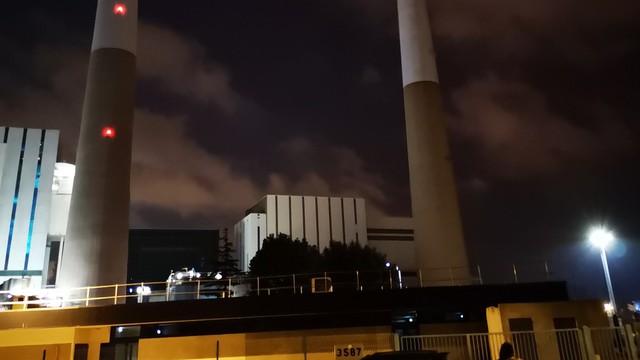 An artificial supernatural creature, hypersensitive to the natural elements, inhabits the two chimneys of the EDF electrical power plant of the harbour of Havre, France. Every day different, every day herself, visible from 50km around, she creates her own everchanging connection between the dark undergrounds of the industrial city and the energies of the sky and the sea. She appears at sunset, danses and moves and turns, passing from one chimney to the other by diving in the depths of the earth or by jumping in the sky. Programmed along artificial life algorithms, moving in an organic and animal manner, her mood is changing, happy or tired, nervous or peaceful, fragile or dynamic, reflecting her sensitivity to the natural elements : chaotic in the wind, dynamic and happy in the rain, etc.. Existing in the in-between of immaterial light and architectural atoms, of the digital of the programs and the energies of the wind and water, she opens the door between worlds and reveals invisible forces.

The two 240m high chimneys of the EDF electrical power plant of le Havre, France are equipped with a double net of 1080 leds of 1m pitch. The leds are visible from 50 km around. The leds are controlled through a Pharos controler. A secondary computer is connected to internet and fetches the meteorological data every 10 minutes, and controls the Pharos through DMX, changing the dynamics, movement, color, and position of the creature. This way, it reacts to the current meterological data. At the invitation of the Un Ete Au Havre public art festival, I created this artwork, which was activated on the chimney during both summers of 2019 and 2020. It was visible every night from the whole city of le Havre, and accross the estuary of la Seine, from the coast and the sea.

Urban situation : The EDF electrical power plant is located in the industrial port area of Le Havre (first container port of France, 11th of Europe). The chimneys are a landmark of the city. They are visible from 50km around, especially from the downtown of the city of Le Havre.

Community or communities involved : The Un Ete au Havre Festival maintains a strong connection with the inhabitants of the city of Le Havre and created many mediation events around the artworks, especially La Sprite.

Impact : The artwork La Sprite seems to have made a strong imaginary effect on the inhabitants of the city of Le Havre, according to the many feedbacks that I have received. People seem to have had a very personal and intimate relationship with the creature of La Sprite.

Tools developed : Specific software program to fetch meteorological data an control the Pharos Led controler. This program was also accessible remotely, for debuging and special events purposes without the need to go on site.