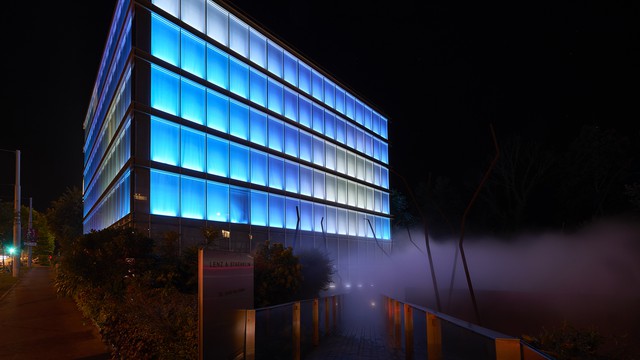 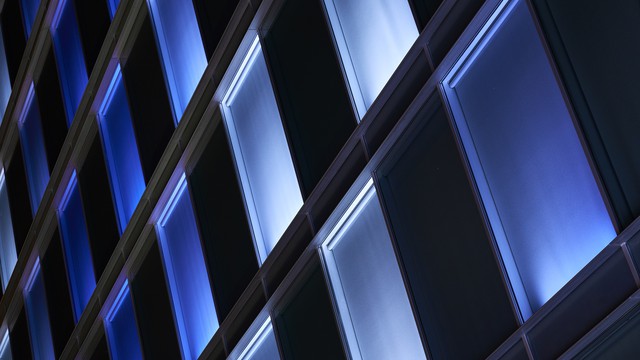 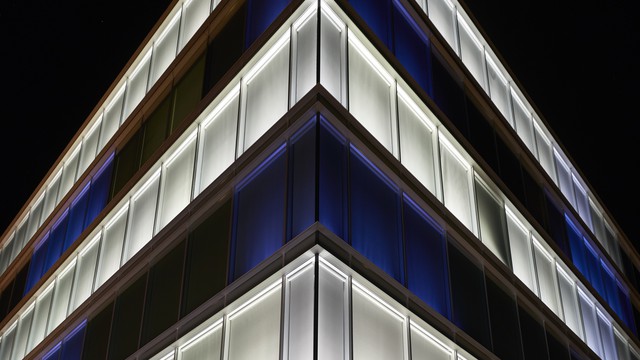 The project reimagines an iconic media facade in central Geneva, Switzerland. When daylight fades, the facade communicates a new artistic expression with real time data integration resulting in natural calm movements of light and expressive geometries drawn from the architecture itself.

The minimalist architectural composition results in a glass cube. The facade is striped to its essential quality, a glass skin, opening a dialogue with the surroundings, depending on the variations in the light condition inside and outside. During the day it is transparent but also reflects the vibrant life of the city and the ever changing sky. The basic repetitive geometry results in an open canvas for lighting & gives a sense of order. The grid modules can be grouped in segments or floors playing with the perceived scale of the building. The first “content family” GEOMETRIES was inspired by the architecture. Second “content family” WEATHER, incorporates real time temperature, wind and humidity data. The data is collected online, analysed and parameterised, triggering changes in Digital content is created continuously by visual algorithms. For example cold temperatures result in cooler tonalities or a wind speed increase makes the patterns move faster. The design started its life from a study into what is called a cybernetic loop. When an object within a urban context affect its surrounding and in return the surroundings affects the object. Third “content family” 8 BIT plays with the façade grid, generating pixel art digital content considering each window like one pixel. The aesthetic for this kind of graphics recalls the 8-bit and 16-bit computers and video game consoles, in addition to other old school systems. The infrastructure can also celebrate Switzerland & other countries national days, sports accomplishments or solidarity by displaying 20 different flags. The renovation improved the aesthetics end energy efficiency of the façade lighting. Previous scheme was more 10 years old, some light sources had been replaced resulting in different tonalities & the software to control was difficult to operate. LDC developed, together with the manufacturer Grupo MCI, a custom luminaire to fit the existing niche in the facade. The client requested to minimize the shadows in the corners and to evenly illuminate each window blind. LDC built a mock-up in Madrid to test three different combinations of optics and holographic diffusers. Chosen optics were elliptic 24 x 48 optics with perfect colour mixing. The new fixture control was designed to be flexible and allow for soft movements of light. There are 320 linear luminaire and 20 corner luminaires. Total 7360 RGBW LED chips. Every two chips or 12 cm can be controlled individually resulting in 3680 pixels with 4 channel. Custom software was developed for lighting control. Different variations from the 3 content families are automatically scheduled and also the client can change the lighting with an online app from any location.