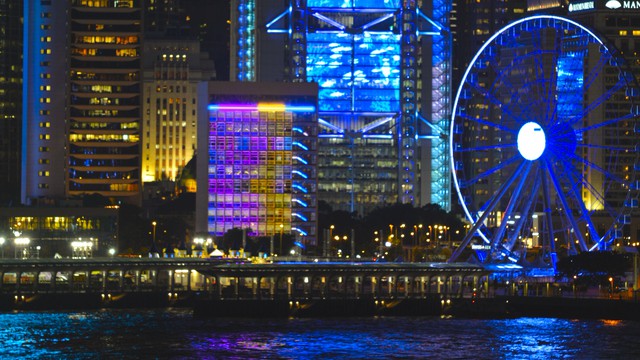 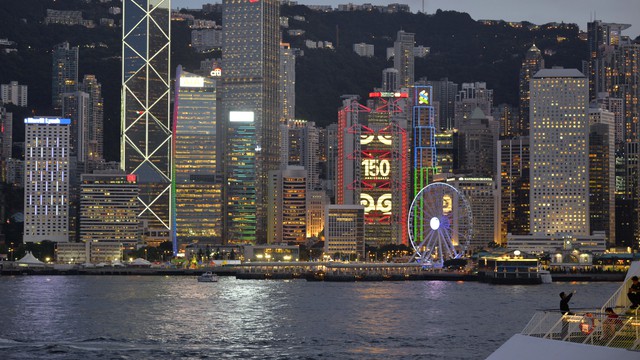 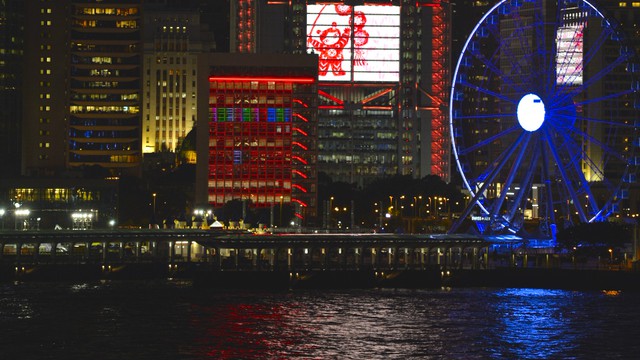 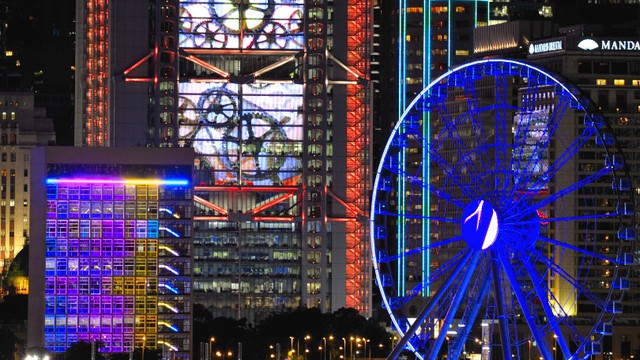 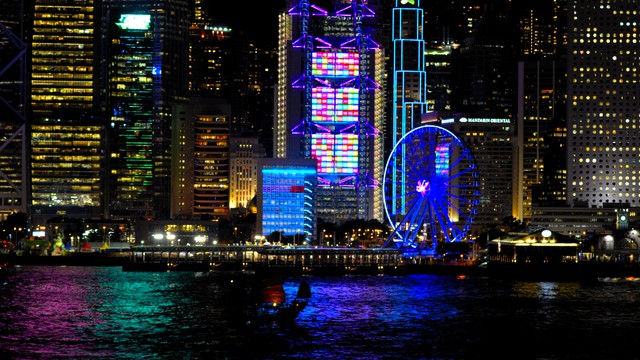 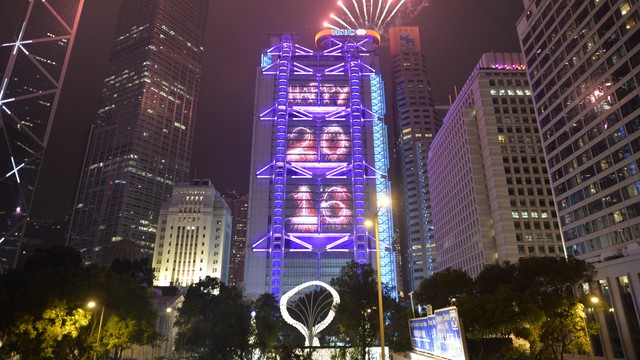 Illumination Physics was commissioned to help bring to life the first wave of HSBC’S 150th anniversary celebration – the digital makeover of its headquarters at 1 Queen's Road Central, Hong Kong. The building makeover is a permanent feature and comes to life every evening between 6.30pm and 11.00pm as well as participating in the nightly world-renowned 'A Symphony of Lights’. Lighting and, for the first time, media content have been combined to create a greater spectacle by displaying more meaningful images which relate to Hong Kong itself.

Illumination Physics was commissioned to do the digital makeover for HSBC’s Hong Kong Headquarters for HSBC’S 150th anniversary. The building makeover is a permanent feature and participates in the nightly world-renowned 'A Symphony of Lights’. 3 media walls were designed to seamlessly be integrated into the glass façades between the refuge floors. The walls range from 880 sq m-1100 sq m and consist of 2652 custom made ‘IP Glass Media' strips which utilize 217,464 RGB LEDs. The 3 media walls can be used to create 1 image or 3 separate images. The lighting accentuates the exoskeleton, comprised of 2 ladder trusses. Suspended from the ladders are brace elements of the exoskeleton. RGBW fixtures with composite lenses were used allowing for improved colour variety and colour mixing abilities. IP Wash 48 was used for the main parts of the exoskeleton. IP Wash 24 was utilized with a composite for the Ladder Truss, enabling accurate lighting of the underside of each rung of the ladder without spill. 3 new light fixtures were designed for this project. Custom versions of IP Wash 48 & IP Wash 24 were designed so that they could be mated to the existing brackets without fuss, speeding up the installation team. 90% of the façade lighting was installed from permanent gondolas. The refuge floors were re-lit using wide angle lens versions of IP Wash 48 resulting in more saturated, enriched and brighter colours. The replacement of the previous fixture to LED reduced electrical consumption by appox. 90%,depending on the programming of the dynamic display. The media is always combined with the façade lighting, creating a lighting display that is synergistic. The media walls are used as animated lighting effects that ‘dance’ in time with the music during ‘A Symphony of Lights’ in the city-wide audio visual display at 8pm.

Facade type and geometry (structure) : The HSBC 150 project was a refurbishment and upgrade of the existing façade lighting System plus the creation of three media walls with a collective area of more than 2500 metres square. The media walls were made up of three separate sections of 7 storeys, 6 storeys and 5 storeys all connected to produce one image.

Kind of light creation : Specially designed content is created to display both the history of HSBC, content relating to branding and corporate messages as well as the nightly display for ‘A symphony of Lights’, the world’s largest sound and light show which involves approximately 50 significant buildings around the shores of Victoria Harbour.

Resolution and transmitting behaviour : The closest achievable view of the conical wall is close at 1oo metres and the furthest at 3000 metres due to the views from nearby on Hong Kong Island and from across Victoria Harbour on the Kowloon side. The LED equipment is installed on the inside of the glass that forms the façade envelope.

Pixel distance : The vertical pitch of the media wall is 40mm and the average horizontal pitch is 200 mm.

Urban situation : The HSBC HQ building is one of the most prominent and distinctive buildings in the Hong Kong Island CBD. It will always have an un-interrupted view of Victoria Harbour.

Description of showreel : The content is typical of the type of imagery used on a daily basis as well as the HSBC 150th anniversary show and also ‘A Symphony of Lights’.