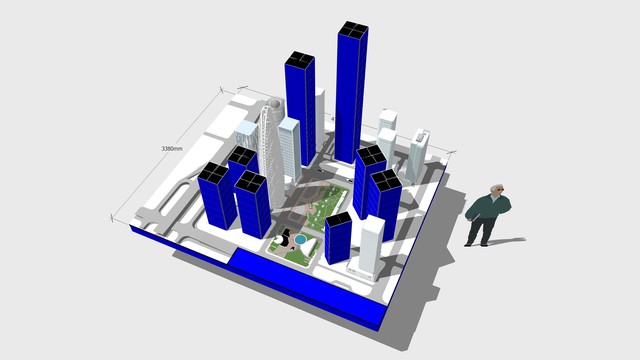 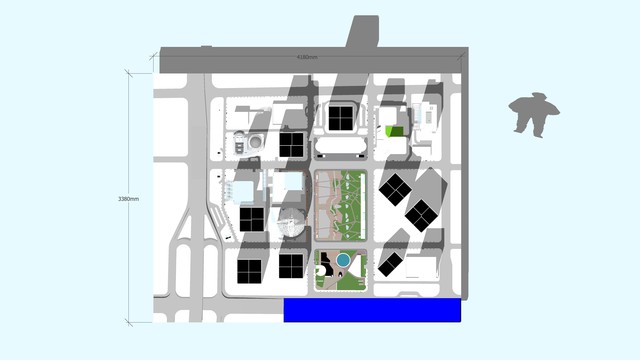 In the past ten years，thousands of media architectures have completed in china, media buildings are assembled into a cluster of multiple media architectures In many cities. So that the media contents can be played together on multiple or even dozens of large-scale clustered media facades, forming one giant dynamic image some are several kilometers. With the bidirectional network of LED light and the promotion of 5G, media architectures can broadcast various public information at any time, collect real-time status information of each node in the city, become a new resource in the decision-making mechanism of smart city, and guide media architectures to the development of intelligent architectures in the future.

Media architecture cluster Real-scene simulation and design prototype Function introduction:1.Solid models of the typical site and building cluster. Single media architecture is to play one single dynamic graphic on a single building facade, while the cluster of media architecture is to play one single dynamic graphic on multiple building facades. Therefore, the media architecture cluster is to assign different chips on every single building, with those graphics joining together into one complete dynamic video. As the buildings which form the media architecture are intermittent, not on a horizontal line, not even parallel in many cases，to show the entire dynamic graphic on discrete, non-parallel media façades is very different compare to on a single building facade. And the other side，according to different view angles ，viewers on the street have different visual experiences from they may receive defects of visual presentation. This simulation prototype can simulate a single or cluster of media architecture scale down in a 3D space which makes the viewer have a whole picture, and adjust line spacing and resolution to make it closer to the actual situation. This prototype is mainly used in the preliminary design stage, dynamic graphics editing, and content pre-review of broadcast programs. 3D simulation can correct the defects which are not easy to notice in the plane viewing, also can reduce unnecessary lighting pollution through the visual test of the light efficiency, so that the media architecture can better integrate into the modern urban light environment. 2. Design and expanded application of the content The "Media Building Content Template" design software has been developed for the Media Building Content Service. This template mainly divided into format series and theme series, such as vertical template series, horizontal template series ，special-shipped template series, and corner template series. And the theme content can be customized according to the needs of the owner. The software also includes template color rendering, graphics secondary correction, but also to provide a custom template of the layout of the lamp diagram. In terms of hardware, develop the professional video server at Business-- terminal end "set-top box", can completely operate and remote control the tasks through the prototype management system, which can achieve content preview, automatic review, flexible release, real-time security monitoring It also has a "copyright monitoring system" to protect the brands’ software interests.

Description of showreel : the optimal viewing point of media architecture (Video 1) and distortion correction of visual graphics (Video 2) can be solved through video servo software (HACOOS) and interactive prototype. In this way, we can avoid the adverse public influence brought by the on-site debugging during the implementation of the project, and simulate the scene from the full perspective of the viewer to show a better visual effect. Media architecture designers, researchers, urban managers, and building owners could browse the test process in real-time on the mobile terminal APP, achieve remote online guidance and collaborative design, and accelerate the progress and development.

Impact : In china，media architecture mainly refers to the public building going into media，which use a large number of LED point light sources on the facade of public buildings to form a luminance array with these pixels, it becomes a super large screen in urban space environment，displaying dynamic graphics, moving text and natural views, etc., with the characteristics of super large, bright and colorful, large pixel spacing and broad horizon. It provides a brand-new information communication channel that promotes tourism, city image, and effects, also form the night economy and commercial ecology for the city.