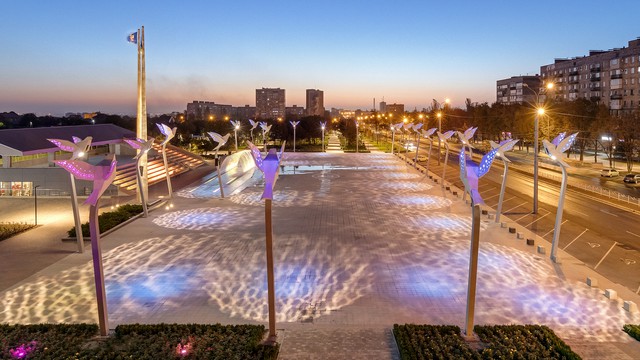 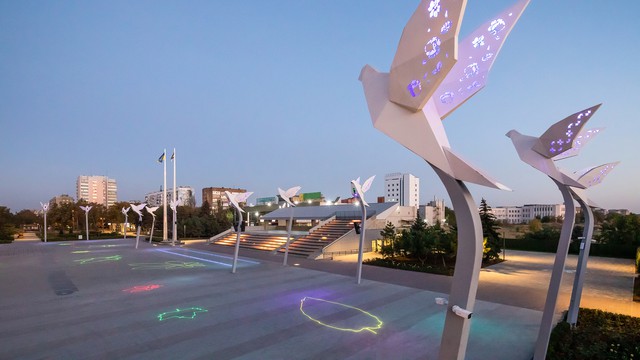 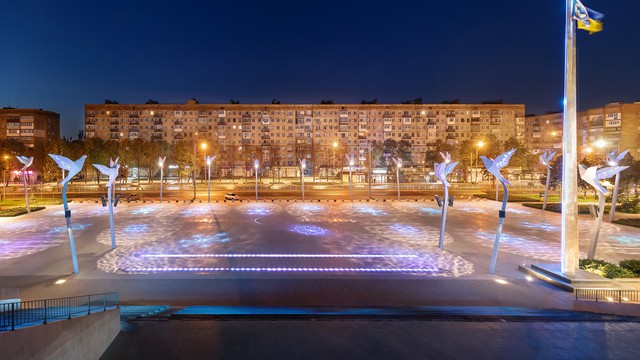 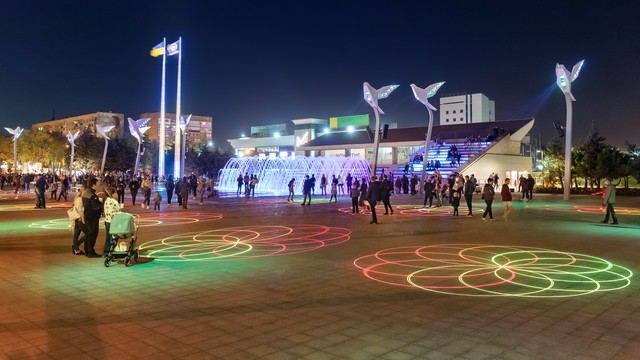 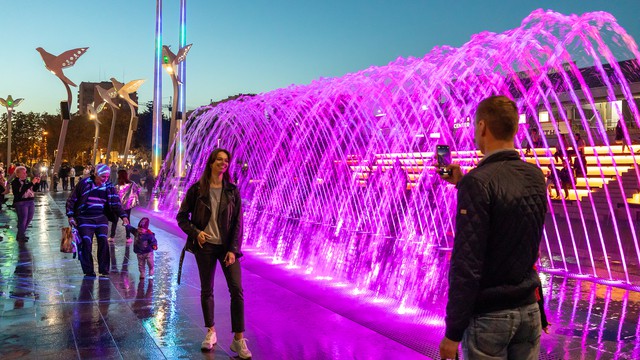 Freedom Square displays modern symbols of the city of Mariupol with the help of light. With the beginning of the military conflict in eastern Ukraine, this city became an outpost protecting the country's territorial integrity.

Mariupol is part of Ukraine, a beautiful and authentic country. We have created a particularly symbolic laser show. Its concept is based on the idea that flowers are an integral part of Ukrainian culture. That is why we make projections of various colors on the square, each of which symbolizes one of the 25 regions of Ukraine. Each flower is unique in its own way. Moving through the area and transforming from a flower into the contours of the region, all these elements gradually merge into a single country. For Mariupol, as a front-line city, this is very important. Decorative supports in the shape of birds symbolize 25 regions of Ukraine. The wings are perforated with national embroidery patterns that glow in the dark. To install all the necessary equipment, we are developing special decorative supports featuring artistic metal birds, symbolizing 25 regions of Ukraine. Birds are house lasers, light sources, and speakers. From the lighting pole-tops, laser projections and decorative light are turned on. Each pole-top has a QR code leading to a site with content about Ukraine, which contributes to interest in our country and new travel! The area is lit differently at every season and on holidays. The gamma of the stand glow, light spots on the square are changing, and thematic laser projections are also included. Light changing the shades depending on events, projections on a pedestrian area, and audio accompaniment reflect the rhythm of the city. The whole location covered with symbolic laser projections. Each projection reflects a visual image and conveys a particular message to the park visitors. Also, flagpoles and a media-illuminated amphitheater are become informative symbols by means of light. We are upgrading the general image of the city and the first associations about it, positioning it as not an industrial center, but a city by the sea. The new symbols of Mariupol are waves and an anchor. With the help of light tricks, we fill the main square of the city with these symbols. The promenade area will be covered with beautiful caustic waves. General lighting is non-intense and moderate, is all light directed downward to illuminate functional areas and minimize light pollution. Also, the principle of biodynamics will be implemented, which means that the light focused on human biorhythms and change the glow intensity based on the time of the day. Through the web application, each guest can create and set off their own laser dolphin among the caustic light waves that cover the area.