a lunar projection of poetic analogies 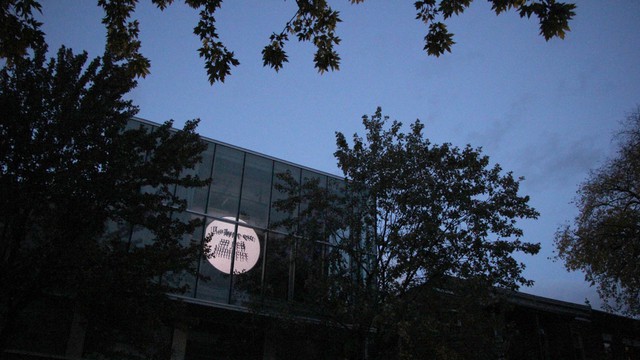 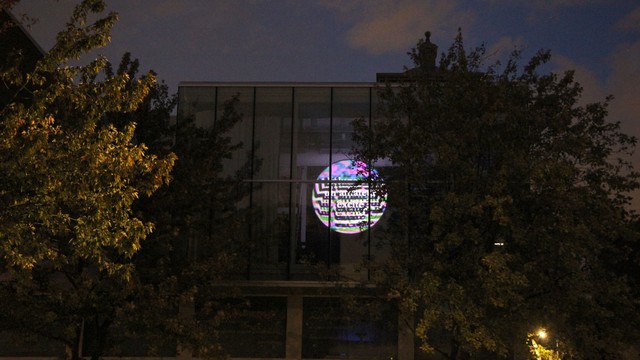 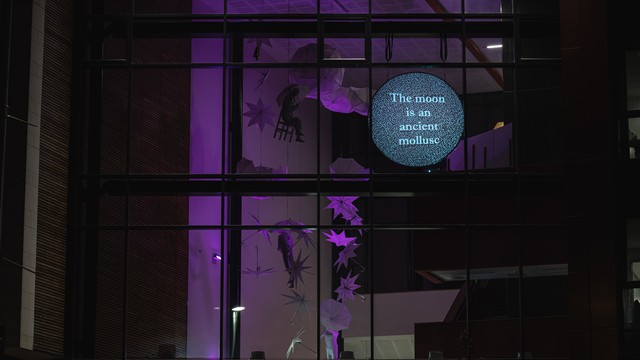 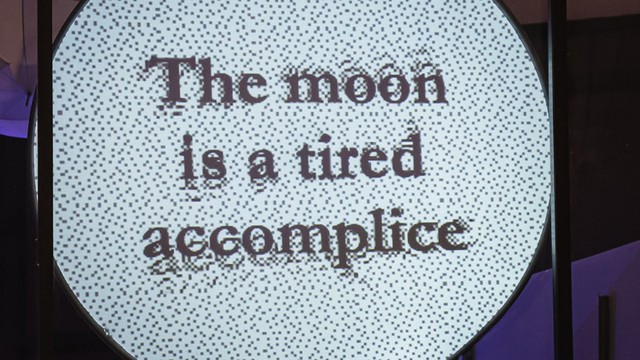 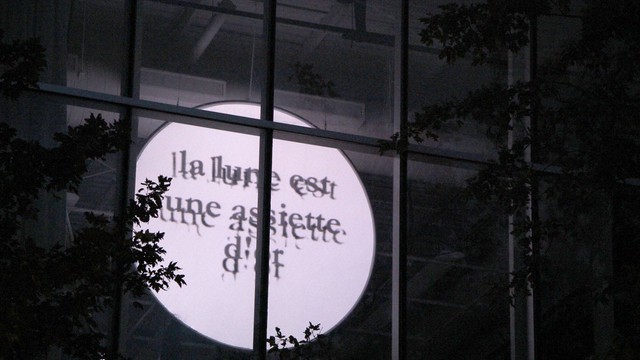 A giant moon hangs in the sky. Words appear on the surface; a bizarre series of metaphors that describe the moon in new ways: 'the moon is a phantom cake' 'the moon is a fortuitous installation' ‘the moon is an uprooted poem’ ’the moon is a quiet revolution’ Analogies are the core of cognition - metaphors are a fundamental building block of artificial intelligence. Is the moon becoming conscious? You can contribute your own metaphors for the moon to the installation! Use the online form or use the hashtag #TheMoonIs on Twitter.

‘The Moon Is…’ is an interactive poetry installation back-projected onto circular screen, that creates the illusion of a moon suspended within a building. The screen displays a series of poetic metaphors about the moon. The work is a response to the challenge of producing covid-safe public-facing interactive artworks. The piece was installed in September 2020 in Montreal, and re-made in Barnsley, UK soon after (December 2020). The piece is designed to be suspended in a public facing atrium or glass facade, and enjoyed from the exterior at street level. A circular screen displays a series of carefully projection mapped evolving textures and texts. At first glance, from a distance the work looks like the windows are reflecting the actual moon. On closer inspection we realise the ‘moon’ is actually suspended within the facade itself, glowing and illuminating the interior. Not only that, but the surface of the ‘moon’ is animated - displaying generative video feedback patterns and a series of intriguing short texts. Each text is a simple poetic metaphor about the moon that has been contributed by the public. Audiences can easily add their own lunar metaphors via an online form or using a hashtag on Twitter (#LaLuneEst / #TheMoonIs ) The work was one of two pieces originally commissioned by the Maison de la Culture, Maisonneuve in Hochelaga, Montreal, in September 2020 as installations that could be safely enjoyed by the public without anyone needing to enter the building. The Moon Is was suspended in The Cube - a 2nd floor performance space with a glass structure - which faces onto l’avenue Desjardins - a street locally referred to as ‘rue de la poesie’ (poetry street). (https://poesiemaisonneuve.wordpress.com/ ) The use of simple metaphors calls back to the of poetry as a form of making meaning through combining unusual images. Analogies and metaphors provide a simple and yet profound entry point for people. Douglas Hofstadter goes further - Analogies are the core of cognition - a fundamental building block of consciousness. The work is made using Isadora (projection mapping, digital video processing, live text rendering), along with a optical video feedback system (cctv camera pointing at the screen) to generate the textures, and online submission system which collates the metaphors in a text file to be immediately displayed. (Twitter / Google Forms > IFTTT > dropbox > Isadora)

Kind of light creation : Digital projection - back projected onto IFR White Stretch Fabric - on a circular aluminium frame. The behaviour of the light is created by an optical video feedback system, and is thus affected by ambient / environmental changes.

Community or communities involved : The texts are contributed by the public - both passers by or online audiences - via online Google Form or Twitter hashtag.

Issues addressed : producing Covid-safe interactive artworks - digital projection installations artworks that can be adapted for different buildings but enjoyed from the outside remote installation and monitoring of digital artworks - how to maintain with minimal / no on the ground access where to find a circular back projection screen! Incorporating optical video feedback systems into public-realm digital artworks ( https://www.researchgate.net/publication/343945339_Video_in_the_Abyss_-_In_the_context_of_the_digital_is_analogue_video_feedback_still_useful_as_an_approach_to_making_art ) Off the shelf systems for audience contribution of texts in interactive works

Impact : In terms of creative engagement (contributing texts) the impact was small in both cities. We did have some contributions though, and they were excellent - the format of the metaphor worked really well in sparking imaginative wordplay - but really it could have been a lot more. The challenge was due in part to a lack of marketing in each city (in turn due to the capacity of the organisations who themselves were responding to a changing situation), but also perhaps due to the works themselves. At street level, from someone randomly encountering the work, it is not immediately clear HOW an audience can engage with it, beyond reading interpretation panels at each site. Visually however, on the level of ‘ambient’ impact, then anecdotally we can say yes, people did stop to look at the work as they passed by.

Next steps : Increasing engagement / submission : The next step for future exhibitions is to develop the engagement work that goes around the piece - making sure that host organisations and myself develop with a strategy for engaging specific communities (eg schools, community groups) well before the install. Secondly, a more clearer onsite system for letting people know they can contribute Technical - text submission Developing a custom and mobile friendly interface (javascript?) for submission of lunar metaphors, including options for random word generators. Automatic moderation - fully developed automatic moderation system - would allow for immediate display on the installation. A version was developed in part through isadora, but never fully implemented. A javascript interface would be a better approach