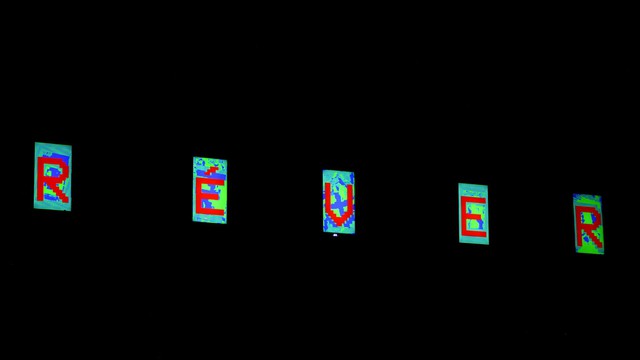 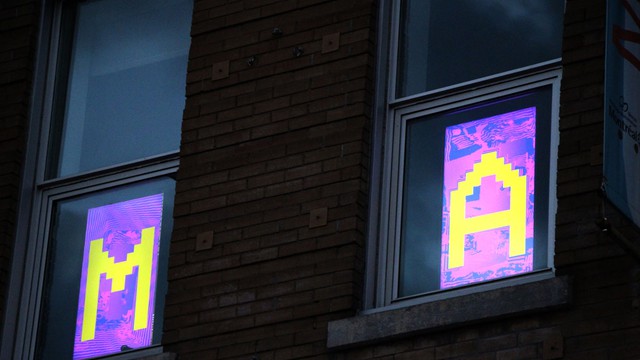 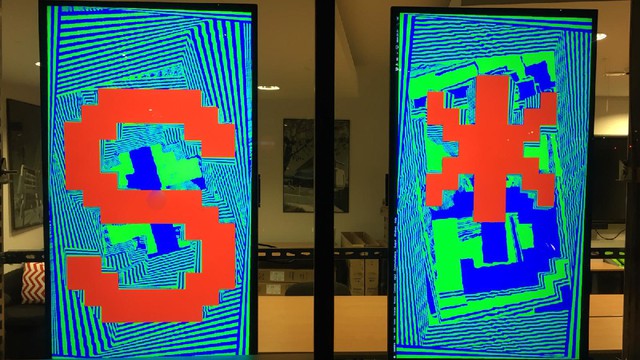 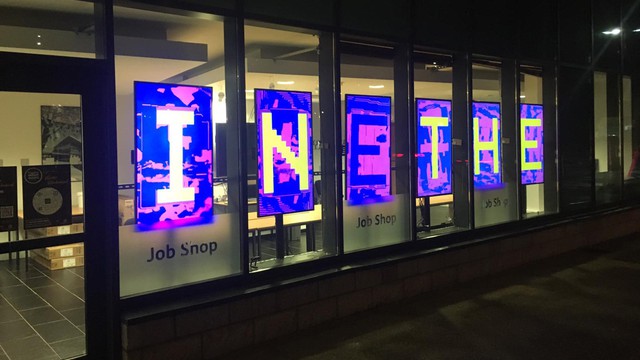 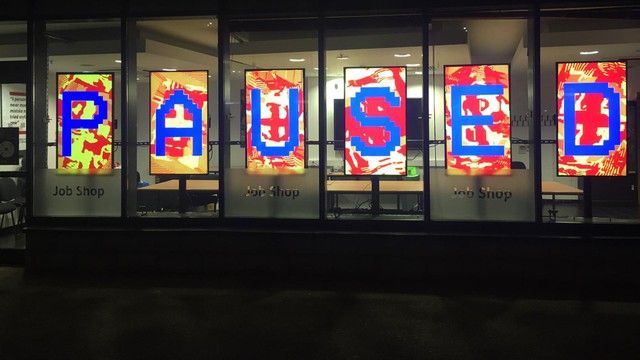 SCREEN POEM / POÈME D'ÉCRAN is generative micro poetry public art installation for windows - 6 screens display a series of short poems using words of 6 letters or less on each line. The letterforms emerge from a soup of video feedback, generating live organic patterns. Passers by create ripples in the text, and you can even submit your own micro poems for the screen via a form, or the hashtag #ScreenPoem on Twitter.

CREEN POEM is an interactive micro poetry installation displayed across several screens, designed to be housed in public-facing windows. Each screen displays a single character (letter / punctation), though together that form a complete word, or line, from a short poem, contributed by the public. New poems can be contributed onsite via an online form or twitter hashtag (#ScreenPoem / #poèmeÉcran) The work is a response to the challenge of producing covid-safe public-facing interactive artworks. The piece was installed in September 2020 in Montreal, and re-made in Barnsley, UK soon after (December 2020). The piece is designed to be installed in windows to be enjoyed from the exterior at street level. The work is modular, and can therefore be adapted to the particular opportunities, restrictions, scale and technical resources at each site. Screens can be placed close together in a single vitrine (Barnsley) or set apart in separate windows (as in Montreal). Any 16:9 screen can be used. The texts are rendered as a bitmap VCR font on a 3-bit colour palette referencing the limitations and aesthetics of early video displays. Characters are surrounded by ‘ripples’ - patterns formed by the echoes of each letterform and even the bounds of the screen itself. These patterns are generated by an internal digital video feedback loop, which adds an unpredictable emergent quality to the otherwise functional display. These ripples can be further agitated by passers (or indeed any environmental movement) via a webcam. The piece is run from mac minis (1 mac per 2 screens) that access a shared text file of poems that is updated live via Dropbox. It has been coded using Isadora, in a way that allows the words to be synced via the computer clocks. Furthermore, a simple text based programming syntax enables us to send commands in-between poems in the text-file itself. For example - we can control the animation speed (eg ‘++++++5’ changes the line every 5 seconds), colour palettes (‘*RYB*’ switches to a Red Yellow & Blue palette), or even run remote diagnostic and installation tasks or display a giant clock. The challenge of expressing ideas within tight limitations forces us to think creatively about what we want to say, and conscious of how we use language. The restriction of the 6 screens / characters per line (or 5 in Montreal) makes for some playful word choice and text contractions. The work was one of two pieces originally commissioned by the Maison de la Culture, Maisonneuve in Hochelaga, Montreal, in September 2020 as installations that could be safely enjoyed by the public without anyone needing to enter the building. The building is sited at the corner of Avenue Desjardins - a street locally referred to as ‘rue de la poesie’ (poetry street). (https://poesiemaisonneuve.wordpress.com/ )

Pixel distance : variable if we consider each tv is also a 'pixel'

Community or communities involved : The texts are contributed by the public - both passers by or online audiences - via online Google Form or Twitter hashtag.

Issues addressed : producing Covid-safe interactive artworks - digital projection installations artworks that can be adapted for different buildings but enjoyed from the outside remote installation and monitoring of digital artworks - how to maintain with minimal / no on the ground access how to sync multiple screen displays across several Macs Off the shelf systems for audience contribution of texts in interactive works Incorporating optical video feedback systems into public-realm digital artworks ( https://www.researchgate.net/publication/343945339_Video_in_the_Abyss_-_In_the_context_of_the_digital_is_analogue_video_feedback_still_useful_as_an_approach_to_making_art )

Impact : In terms of creative engagement (contributing texts) the impact was small in both cities.The best engagement came in Montreal through the Centre St Louis french course for new immigrants, who used the installation as french writing exercise - but really it could have been a lot more. The challenge was due in part to a lack of marketing in each city (in turn due to the capacity of the organisations who themselves were responding to a changing situation), but also perhaps due to the works themselves. At street level, from someone randomly encountering the work, it is not immediately clear HOW an audience can engage with it, beyond reading interpretation panels at each site. Visually however, on the level of ‘ambient’ impact, then anecdotally we can say yes, people did stop to look at the work as they passed by.

Next steps : Increasing engagement / submission : The next step for future exhibitions is to develop the engagement work that goes around the piece - making sure that host organisations and myself develop with a strategy for engaging specific communities (eg schools, community groups) well before the install. Secondly, a clearer onsite system for letting people know they can contribute Technical - text submission Developing a custom and mobile friendly interface (javascript?) for submission of poems - a simple ‘grid system’ to enable audiences to ‘typeset’ their poem. Automatic moderation - fully developed automatic moderation system PROGRAMMING ENVIRONMENT - further exploring the possibilities of SCREEN SYNTAX to give audiences control of not just the text displayed (ie the ‘poetry’) but the operations of the installation - moving between colour palettes, modes, games even?