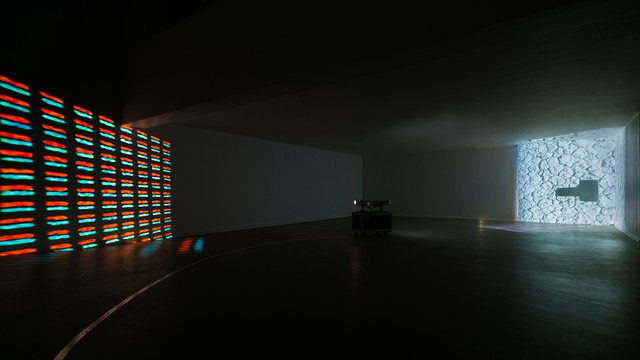 On February 14, 1990, before permanently turning off its cameras, NASA’s Voyager 1 briefly turned towards Earth to snap one last picture. Shot from a distance of 4 billion miles, our planet appears as a pale blue dot, suspended in a sunbeam. Taking Pale Blue Dot (1990) as an anchor point, this project addresses the concept of scale as an epistemic shift in our awareness brought on by the Anthropocene.

The recent surge of aerial imaging technologies such as satellites and drones has prompted scholarly discussions on what has come to emerge as a new visual paradigm. Pointing to the technologies of surveillance, tracking and targeting, such as drones and satellites, this development is accompanied by a growing amount of remote sensing and visualization systems “that give us operational representations of the planet” (Parikka 2016). The exponential growth of ortophotomapped representations of Earth through cinematized data sets produces affective scalable models of our planet far from the vibrant ecosystem that in Buckminster Fuller’s words “spins in space traveling 60 000 miles an hour in the midst of rich non-human life as well as the intensive relations to other planets and the Sun” (Fuller 1969). As evident in the growing field of spatial data visualization, a model limits complexity in order to discern a current trend and predict a future scenario. Following Bruno Latour’s concept of design, the Zoom Blue Dot project questions the agency of these Earth models while addressing the imaginative and emotional capacities increasingly colonized by remote sensing and aerial imaging technologies.