All Colors Are In The Lights 2019, Taiwan, Taichung 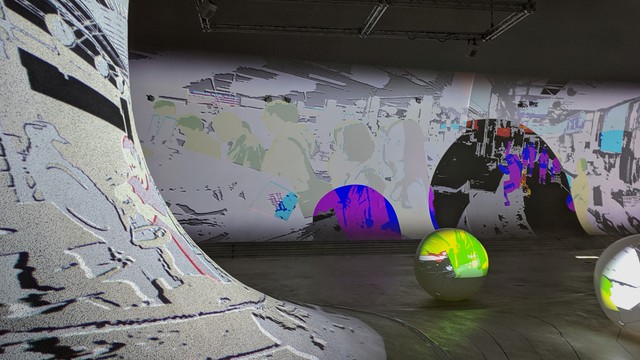 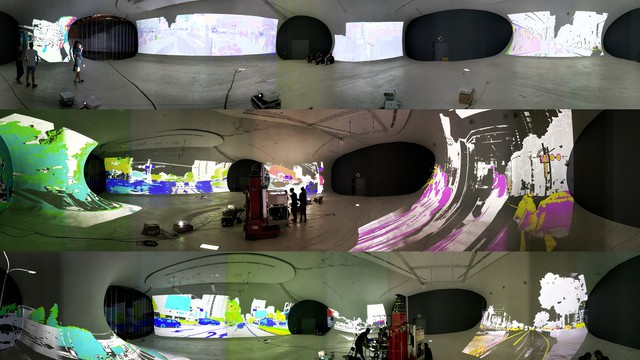 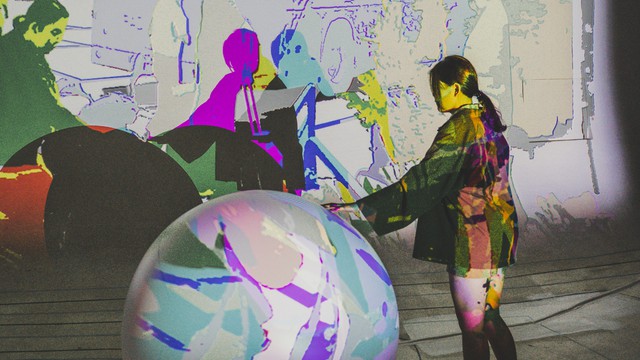 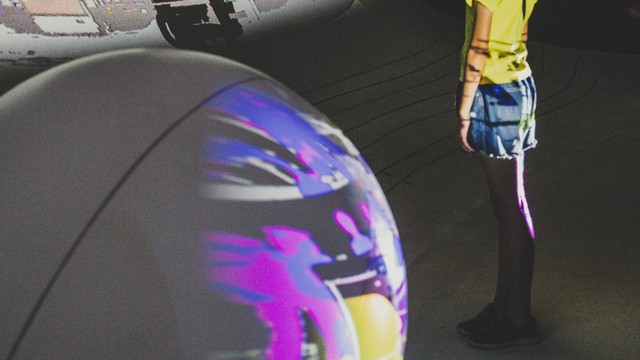 “All Colors Are In The Lights” (ACAITL) is an interactive installation work that animates the environment via arrangements of images and projections. Without complicated sensing techniques or movable mechanisms, an intuitive light and shadow show with everyday street view images creates an instantly relatable urban experience to the audience. A playful and responsive engagement between an enclosed interior and an open urban spatial environment is presented in a way that invites maximum public participation, whether to interact with the imagery, the projections, or the interior space, individually as well as collectively.

All Colors Are In The Lights (ACAITL) is a 20-minute 12-channel projection installation project commissioned by the National Taichung Theater that takes place in the Tutu Gallery, a 460-square-meter exhibition space at the heart of the building. The work depicts a journey from the outskirts of the city all the way to downtown via the most important main road in the city (Taiwan Boulevard), aiming to represent an everyday urban commute experience to the indoor audience. The cross-town traffic was captured by a 360-degree camera into a panoramic movie and then extracted to 270 frames. Each frame lasts for 4.5 seconds, making the total time equal to the original trip of 20 minutes. Each image depicts a view that is 25 meters further on the road, therefore the video is a slow stop-frame animation of city surroundings from a moving vehicle’s point of view, not unlike pushing the forward key while in a “street view” mode on a digital map. The panoramic video is separated into four views, facing front, right, back, and left, projecting on the four main curved walls in the gallery, to resemble observing the city in a moving car through its windows at each side. However, the projections are all layered: At least two projectors overlay images on every wall, while the main wall on the front has images layered and stitched by six projectors. The layering of images is to create additive mixing of lights. From the same base images, street elements (vehicles, buildings, passengers, trees, etc.) are identified, grouped, and then cast with pairing primary or secondary colors. The colors are coded in a way that the same group of street elements receives complementary colors, therefore when projected together on the wall, the layers add up to white. The abstract white shades only reveal its descriptive color profiles when a viewer moves between the projectors and the curve wall, casting its shadows not in black but in vibrant colors as if the viewer’s participation activates the animated urban imageries.

Pixel or other basic module/ elements : None

Facade type and geometry (structure) : All Colors Are In The Lights (ACAITL) is a 12-channel site-specific projection installation project in the gallery space inside the National Taichung Theater. Since its inauguration in 2016, the theater (designed by Japanese architect Toyo Ito) has been an important architectural landmark and popular destination for the public in the city of Taichung, Taiwan. The unusual building -- continuous curved concrete structure, changing between 3D convex and concave geometry, forming floors, walls, and ceilings at the same time -- creates an organic cave-like interior connection of spaces that makes ever-changing but always striking spatial impressions.

Urban situation : In ACAITL, the common urban experience of commuting with the traffic on Taiwan boulevard is captured in a similar way as Google Street View, while a continuous panoramic perception is sampled into a series of stop-frame images, to be compiled later into an animation series that occupies the same time as the actual travel. The aim is to represent a recognizable perception of urban movement, while defamiliarizing the visuals in order to isolate and condense the sense of a steady flow of space. In dialogue to the term “moving images”, the work aims to create the experience of “moving through images”.

Description of showreel : The imagery in ACAITL represents the selective mechanism in terms of perceiving and conceiving urban spatial information through a five-step procedure: Documentation: A series of panoramic shots are taken to represent the cityscape. Interpretation: The visual information in each frame is identified in four groups. Coding: A coding pattern is set to separate the original full-color photos into two / three images, with contrasting colors of visual elements to create overlapping addition of lights. Projection: Multiple projectors are arranged to overlay the images together to reconstruct the original view. The additive color model matches up primary and secondary colors into white. Interaction: When stepping in front of the white images, instead of casting shadows for lack of light, one reveals colorful shadows depicting urban elements and scenes.