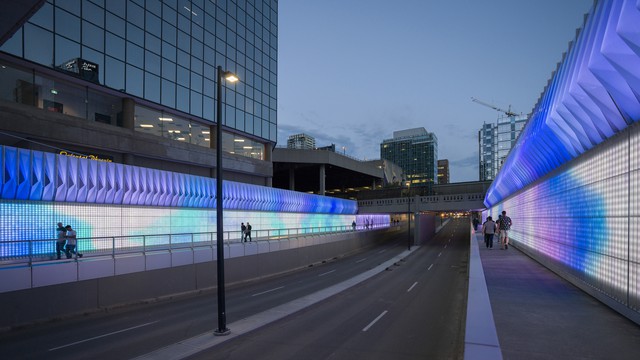 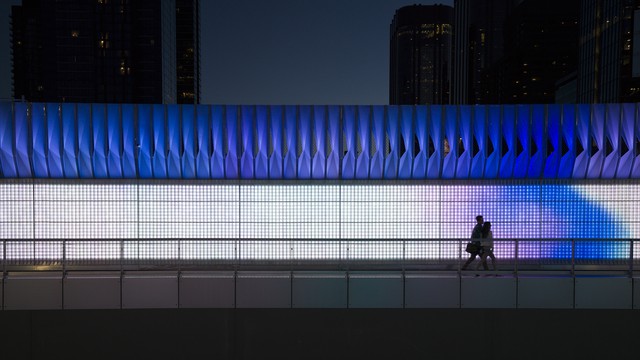 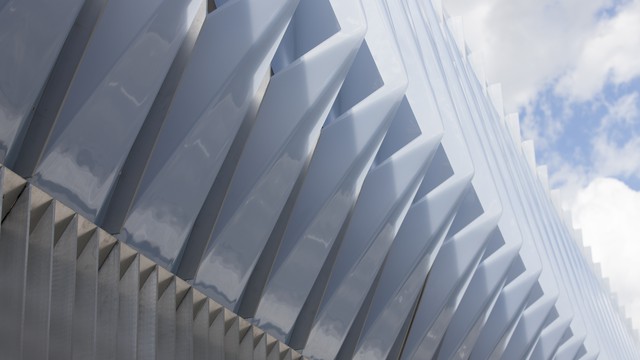 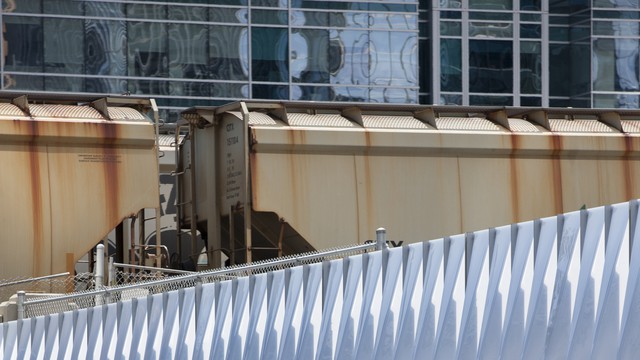 Reclaiming city infrastructure as a ‘space for conversation’ - an integrated public art and urban infrastructure strategy exploring public space not as a physical territory but as a social domain within the fabric of a City.

Situated in Calgary, Alberta, Canada, the 4th Street SW Underpass Enhancement Project is an integrated public art and urban infrastructure project intended to improve a key pedestrian gateway to Calgary’s city centre. The existing state of disrepair of the underpass was contradictory to its critical mobility and gateway function, with its inactive edges, limited accessibility, poor lighting, and overall material deterioration requiring immediate attention. As a result of these safety and comfort concerns, pedestrian movement through the space was observed to be highly mechanical, singular in focus, isolated in feeling, and driven by a desire to exit: a collective recognition of the 4th Street SW underpass as both a physical and perceptual space of removal. In response, the 4th Street SW Underpass Enhancement Project is founded on the notion of reclaiming this ‘space of removal’ as a ‘space for conversation’. The introduction of animated light and colour, responding to the flow of people through the space, ensures the underpass experience becomes evocative, varied and timeless. By augmenting spatial experiences latent in the existing site’s geometry, both the urban design and public art are understood as part of Calgarians' everyday experience. Based on the inherent spatial configuration of the underpass, there are three conditions that the design responds to: a Space of Anticipation as one moves towards the underpass, a Space of Reflection as one passes under one of the underpasses, and finally a Space of Conversation when one is between the two underpasses and suspended above the roadway below. The experience of moving through these spaces is intended to create an awareness of the self as one approaches and moves below the two underpasses, and as they emerge into the centre space of the underpass with an unobstructed view towards the opposite side of the underpass, an awareness of others. Here, the space of conversation is defined by a frame that connects to the scale of the human body and houses the responsive public art light-scape. The frame visually supports bodies in space while offering a contiguous material palette which figuratively bridges between the east and west sides of the underpass. Above the frame is a translucent veil that extends the projected light-scape with its figurated surface capturing, transmitting, and reflecting natural and artificial light. The responsive public art uses sensors to trace pedestrian movement in the underpass space and an “avatar” of the movement is translated onto the opposite side of the underpass within the responsive media wall. Through this avatar, the user becomes an active participant in a public narrative. When new users are introduced, there is a layered experience creating moments of interaction between avatars and users of the space. Taken as a whole, the public art provokes a consciousness of the body within the social space of the city, a space of conversation where none existed before.

Building or project owner : The City of Calgary

Facade type and geometry (structure) : The 87m long assembly was conceived as a surface-mounted ‘sleeve’, fit above the existing concrete infrastructure on both sides of the underpass. The assembly is composed of custom metal fabrications with translucent polycarbonate and glass diffusing surfaces. Materials were selected for the quality in which they reflect, diffuse, or ‘catch’ light to allow the framework for the lighting to become essential to the experience of the observer. These materials include a reflective aluminum ‘exoskeleton’ on the public side made of notched and welded 9.5mm aluminum bar stock, an 8mm layer of tempered, laminated safety glass with a translucent interlayer for light diffusion, a 9.5mm thermoformed, translucent polycarbonate geometry, and a supporting galvanized steel subframe surface mounted to the concrete infrastructure of the underpass.

Kind of light creation : The responsive public art lighting installation is composed of a total of 216 Nano Linear Allegro AC XB RGB LED fixtures and 17,248 individually controlled DOT XL-3 RGB LED fixtures by Traxon Technologies, with half of all fixtures located on each side of the underpass within the protective and performative assembly of custom metal fabrications, polycarbonate and glass. The public art lighting experience is created with a custom detection technology software developed by INVIVIA. This custom software receives video content of pedestrian movement via 4 on-site cameras, analyzes and filters this content, and translates it into the abstracted, colourful representation experienced by visitors to the site.

Resolution and transmitting behaviour : The DOT XL-3 RGB fixtures located in the installation at the centre of the underpass are provided at a resolution of 9 controllable nodes per square foot.

Pixel distance : The DOT XL-3 RGB fixtures are organized and mounted to aluminum LED panels, each with 88 dots at a horizontal and vertical pitch of 102mm.

Urban situation : This project was implemented as part of The City of Calgary’s Centre City Underpass Enhancement Program - a strategy to improve linkages between the city’s Downtown and Beltline communities separated by the Canadian Pacific Railway. Though conceived as a mechanism to improve safety and connectivity for its daily commuters, the City’s underpasses have ironically come to embody the most uncomfortable of Calgary’s public spaces. A 2015 Centre City Perception survey identified Calgary’s underpasses as having the lowest rating of all centre city infrastructure for cleanliness and citizen expectation. In 2010, the 2-block stretch of the 4th St SW underpass was identified by The City as a priority for improvement and launched the project in January 2015. Around this time, the underpass was used by approximately 8,100 people daily, accounting for nearly 20% of all pedestrian traffic to the core.

Community or communities involved : The 4th Street SW Underpass Enhancement Project is a result of hundreds of hours of dedicated public engagement, as described within several landmark City of Calgary documents now available on the City of Calgary website: https://engage.calgary.ca/4thStreetSWUnderpass. A significant element of the design process was the continued engagement of internal and external stakeholders. Working closely with the Design Team, interested individuals were offered four critical opportunities to participate in the creative process: identifying issues, finding collective solutions and influencing the project as a process and a product. A full-scale mock-up was completed towards the end of the Design Development phase to demonstrate proof of concept, facilitate owner and stakeholder buy-in, and provide a tool for design research for the future development of the detailed drawings for construction.

Host organization : The City of Calgary