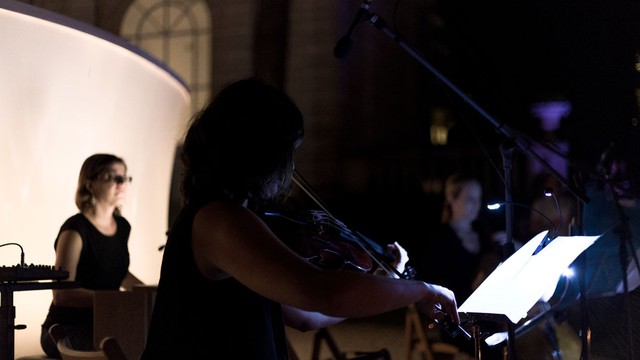 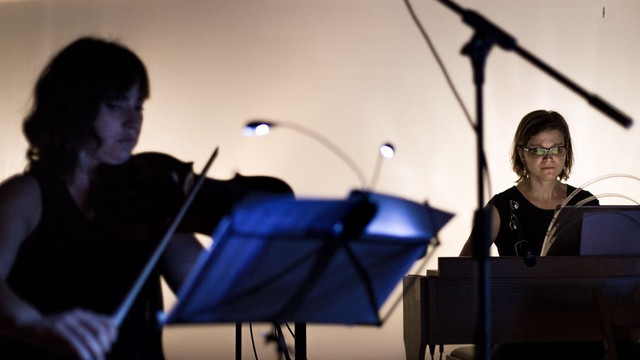 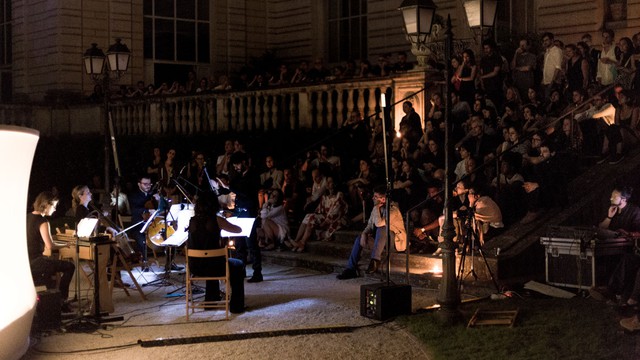 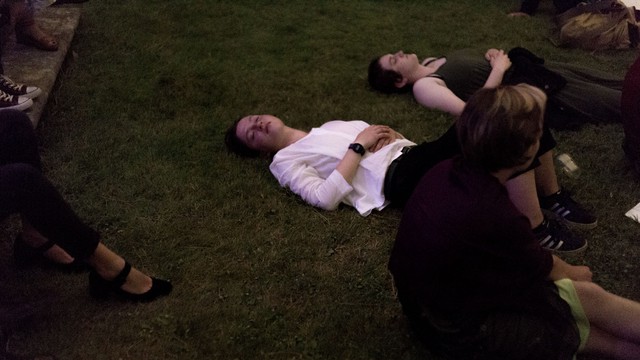 Gibigiana is an experimental and interactive media installation constructed around a central fountain at the American Academy in Rome (Italy), that creates an ever-changing landscape of light by reflecting the light off the surface of the water in the fountain onto a translucent shroud, registering the shift made by agitating the water through force exerted from the muscular act of music making during a performance.

Gibigiana is an experimental and interactive media installation constructed around a central fountain at the American Academy in Rome (Italy) in 2018 as the setting for a performance by American composer and Ondes Martenot instrumentalist, Suzanne Farrin. The installation consists of a translucent shroud that encircles the fountain and high-intensity lighting that reflects agitations made on the surface of the water in the fountain onto the shroud, based on the force that musicians exert on various different instruments during a sting quartet performance. Using analog techniques, each performer's arm is attached to a wire that extends through the shroud, into the fountain, with a heavy and reflective object that agitates the surface of the water. As the performers play their instruments, the muscular act of music making is registered on the surface of water and reflected onto the shroud to create ever-changing and meditative patterns. Members of the academy as well as from the greater artistic community of Rome were present at the event and immersed in both the visual and audio components of the piece.

Interaction design/ programming : Effects made by musicians' bodies and their interments

Project sponsor/ support : Funded by the Fromm Music Foundation, The Aaron Copland Fund for Music, and the American Academy in Rome

Facade type and geometry (structure) : With the direction of Stefano Silvia, our team created a simple wooden scaffold that held both the high-intensity lighting as well as the translucent shroud around the fountain.

Kind of light creation : 8 High-intensity lights were attached to the scaffold and angled to reflect the patterns from the surface of the water onto a translucent shroud.

Urban situation : The American Academy in Rome is a leading American overseas center for independent studies and advanced research in the fine arts and humanities. Its campus is located on the Gianicolo (Janiculum Hill), with close proximity to the urban area of Trastevere. Today, the American Academy, is a dynamic community intimately connected to the ongoing transitions in the arts and humanities in Italy, Europe, and around the world. It is a forward-moving, forward-thinking community of artists and scholars enlightened by, but not trapped in history, a modern intellectual community dedicated to preserving its past while linking that past to the demands and sensibilities of contemporary society.

Description of showreel : The visual material was created by the live performers who were agitating the surface of the water according to the specific muscular force that each instrument demanded in the performance. The resulting visual material was an ever-changing pattern of frequencies that shifted according to the intensity of bodily movement within the composition.

Community or communities involved : The performance was created for the community of artists, scholars and trustees at the American Academy in Rome and was additionally open to the greater public.

Issues addressed : Stefano Silvia, who is trained in set design, assisted with the lighting angles, and the scaffolding for the shroud.

Impact : The result was a meditative experience immersed in the ever-changing patterns of light and sound. There are philosophical positions explored through this piece as well which are discussed in the project description file, the link of which is above.

Next steps : One time experimental experience.