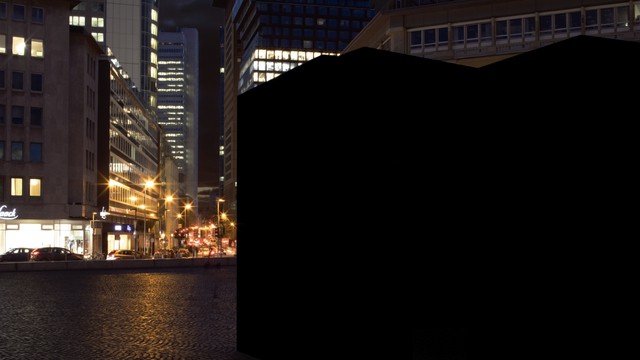 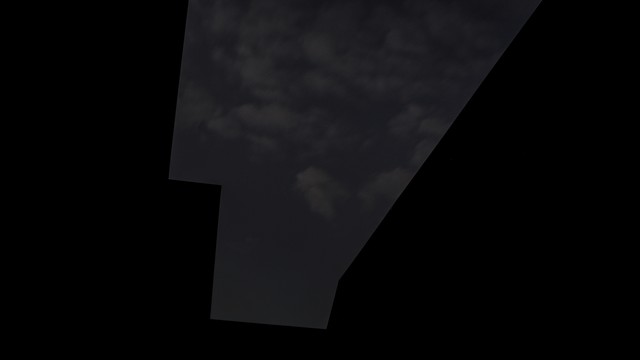 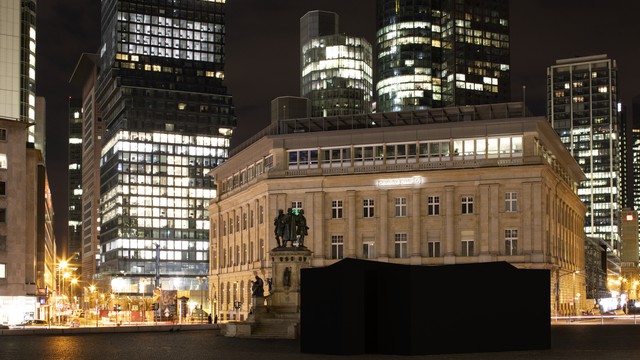 Dense urban living space, dramatic illumination of buildings, street lighting, and industry – these factors all make it difficult to experience the night as such. The night is bright. Too bright to observe the night sky and the stars as the inspiration they used to be for the artists of the Romantic period. In order to be able to do so, one must seek out the remotest corners of Germany. On the other hand, the illuminated skylines are also symbols of modern romanticism. With its buildings illuminated to great effect, the Frankfurt night sky is one of the brightest in Germany. Touching Night Skies was a temporary art installation, created at a specific location (>> 50°06'44 "N 8°40'36 "E). Being placed beneath Frankfurt’s brightly illuminated high-rises, it provided an immersive urban experience shifting focus to the differences in experiencing “darkness” within a city with a bright night sky.

In the shadow of the brightest high-rises in Germany, I enter a deep black corridor. The black walls surround me bit by bit. After a few steps, I can no longer see the city to my left and right. Only the bright floor and the bright night sky give me stability and orientation. The space around me has ‘disappeared’, corners and edges are invisible. All that remains is the space of the sky and the certainty of standing with both feet on the ground of the city. The darkness has enveloped me. I am completely immersed in a black sea – only the bright night sky above me. It is dark and bright at the same time. The night is one of the important subjects of romanticism. Novalis, Brentano, Eichendorff, C. D. Friedrich – the creators of Romanticism have attributed a very special position to the night. For them she was a symbol of darkness, mystery, and secrecy. The night was also regarded as the source of love and the sensory impressions merged in it. Dense urban living space, dramatic illuminations of buildings, street lighting, industry – all these factors make it increasingly difficult to experience ‘Night’ as such, as cities and the skies above them become brighter. To perceive the night sky, as it was the inspiration for Romantic artists, the remotest corners of Germany must be visited. On the other hand, the illuminated night is also a symbol of modern romanticism – who has never gazed at an illuminated skyline at night in wonder? And how can we all deal with this contradiction? What is actual darkness in an urban environment and what does it feel like? “Touching Night Skies” was a space created for the light art festival Luminale at a specific location (50°06’44’’N 8°40’36’’E) the Rossmarkt in Frankfurt am Main. Being placed amidst the impressively illuminated buildings, beneath one of the brightest night skies in Germany, the installation provided an intense immersive experience with a sequence of intense sensory impressions. Two angled wall elements have been placed in a way that their interlocked arrangement created a small courtyard with no roof, allowing only to look above towards the sky. The surrounding buildings have no longer been visible – the visitor just felt their presence as the view was directed towards the sky. All walls of the construction have been covered with timber panels and painted with one of the blackest paints available. The inner construction consisted of standardized Layher components. The deep black robbed all surfaces of their material properties. The room’s corners have no longer been perceptible. Thus, an ambiguous place was created, whose space-forming properties stepped into the background. The particularly intense, physical experience resulted from the absence of a “room” and the contrast between the black paint and the bright night sky above Frankfurt’s city center. “Touching Night Skies” deliberately refrained from staging ‘with’ light and used darkness and the omnipresent light of the urban space instead.

Urban situation : The Rossmarkt in Frankfurt is a central square where several important urban connections meet. It is also directly located beneath the high-rises of downtown Frankfurt. It is a place that is symbolic for the loss of night and all sensual, sensory and ecological shifts connected to it.

Issues addressed : "Touching Night Skies" adressed the discrepancy coming out of the area of conflict involving aspects like light pollution, our contemporary understanding of urban design when it comes to urban lighting design (staging of city skylines) and our desire for security (brightly illuminated streets). With this, also other topics like the rebound effect that is created by the LED-technology that is being rolled out across cities around the world.