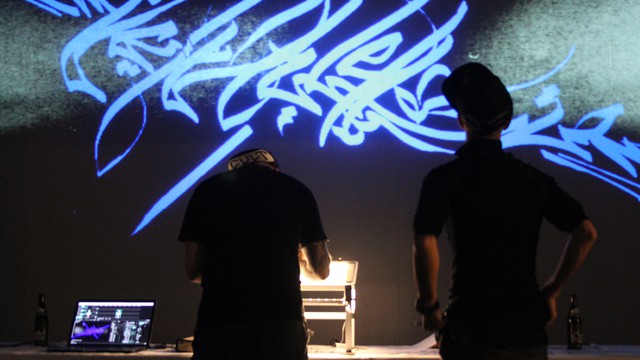 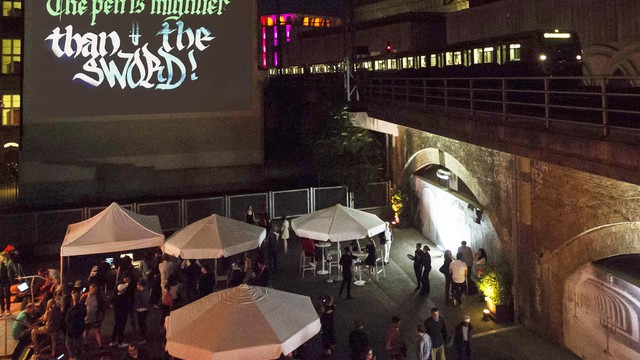 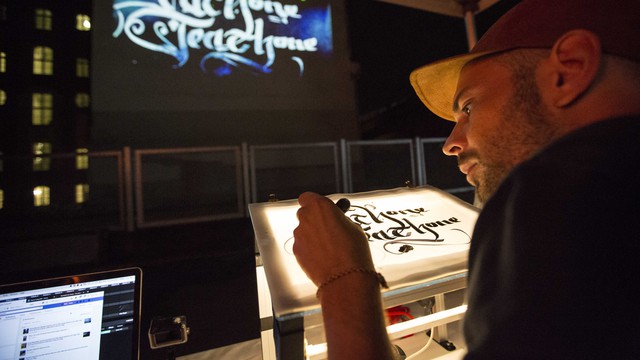 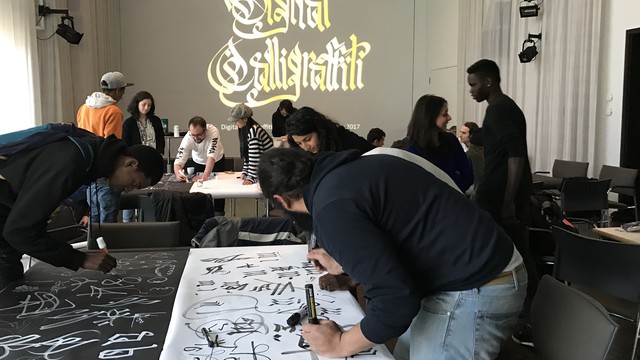 Digital Calligraffiti is a new form of intercultural exchange that combines the traditional art form of calligraphy and graffiti with today’s possibilities of responsive urban media art. It has initially been developed to give young refugees living in Berlin a public stage to share their messages and view on current topics. The participatory projection format gives a chance to all social groups to freely share their wishes and visions co-created with the artistic guidance of renowned calligraffiti artists facilitated by the Inl3ctor which is an interactive light to project the messages in a realtime performance on urban screes and walls of our cities and transform urban screens and walls into a canvas of storytelling and free expression.

Digital Calligraffiti is a community project and an artistic campaign on public screens that endeavours to contribute to the integration of migrating cultures. It was originally developed to invite representatives of the migrating cultures to the 'Digital Calligraffity Camp' to exchange with traditional calligraphers, calligraffiti and urban media artists by investigating the question of sharing values: Where/How is the future that we dreamed of yesterday? What cultural values do people with migration background want to preserve from decaying and integrate to the way they live today? Which messages do we wish to 'write beautifully' and pass on, and which aesthetic forms are at our disposal in a time, where our language is almost exclusively digital. In a co-design process the participants of the migrating cultures have learned how to draw calligraffiti and animate the analogue creation of the calligraffiti artworks for the artistic campaigning on the digital infrastructure of the urban screens of Berlin under the guiding principle 'urban screens are our canvas!' The Infl3ctor enables a live visualization of all those ideas and emotions. It is an interactive light table - especially designed for Digital Calligraffiti by the media artists Michael Ang and Hamza Abu Ayyash - to project the calligraffiti messages on the urban screens of Berlin an also to distant cities through networked scenarios. In a time where the refugees’ transportation is a burning matter this projects opens up new avenues of communication empowering at least the transportation of thoughts.

Building or project owner : The project is initiated by Public Art Lab in cooperation with From Home to Fame Publishing and the artists Michale Ang and Hamza Abu Ayyash

Project artist/ concept/ design/ planning : The project is initiated by Public Art Lab in cooperation with From Home to Fame Publishing and the artists Michale Ang and Hamza Abu Ayyash

Kind of light creation : projected light painting and drawing (calligraffiti) facilitated by the Inflector which is an interactive light table for realtime drawing

Urban situation : Digital Calligraffiti can be adapted to any urban social context.

Description of showreel : Digital Calligraffiti is interactive projection performance that provides a platform for realtime writing and drawing meaningful statements by the citizens facilitated by calligraffiti artists and the interactive light table called Infl3ctor. It can also create a networked projection performance between differnet venues / cities when an inl3ctor is set up in two places.

Community or communities involved : Digital Calligraffiti was originally developed for the migrating 'newcomers' in Berlin. However it can provide a platform for all social groups (including children) and can also facilitate a translocal dialogue beyond physical borders. The written statements from two cities will 'meet' on the projections wall / screen and are visualised through different colours.

Impact : Digital Caligraffiti is a good showcase for an urban art project that can contribute politically and socially meaningful messages on large scale digital infastructures with a high outreach to create awareness for emmergent themes of our daily urban life.

Next steps : Digital Calligraffiti is invited workdwide to different frameworks as a civic platform for engagement and translocal exchange