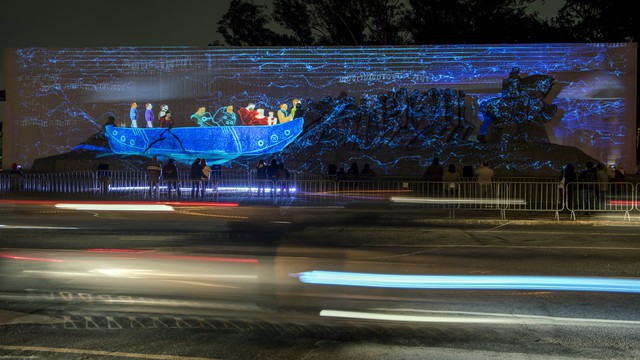 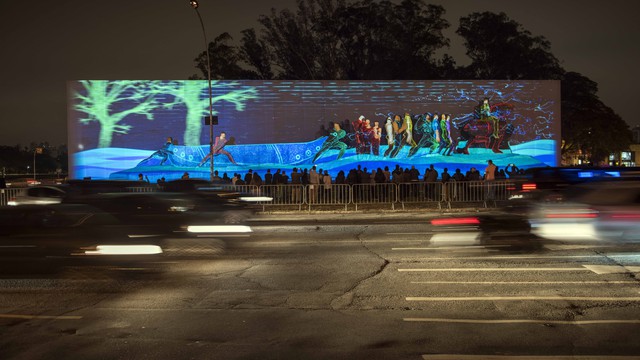 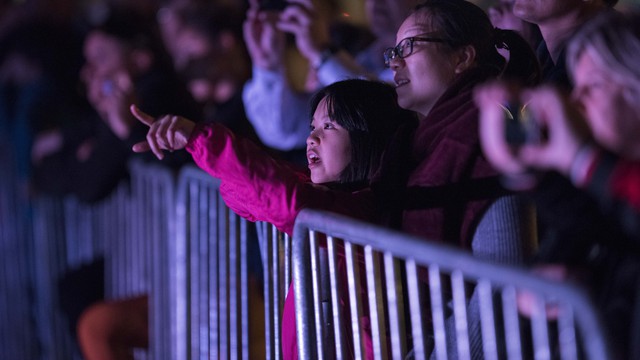 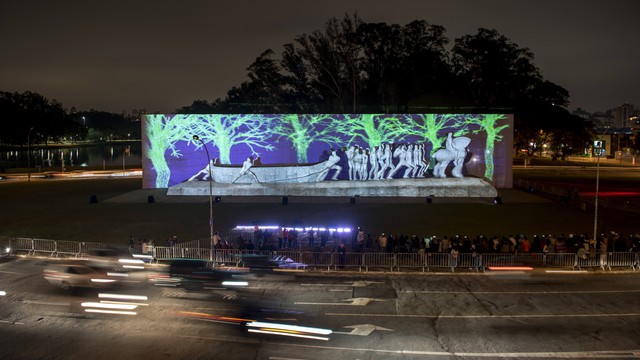 Sao Paulo based Visualfarm studio created an installation that would not only give movement to 13 statues in a 43 meter long monument, but also used projection mapping to remix a controversial historical monument into a image ready to inspire Brazilians in the 21th century. The installation used a carefully planned placement of projectors and lights aimed at the audience pupil, all time-code synced in the media server, in such a way that parts of the monument could hidden or revealed in different moments of the audio-visual experience.

Visualfarm, a São Paulo based studio, decided to address the issue of what to do with monuments that hail controversy historical figures, heroes that are no longer accepted as such from all the inhabitants of a city. In this case, the original monument celebrates the Bandeirantes, white Portuguese that helped conquer the Brazilian countryside in the 18th century, killing and slaving thousands of Indians in this process. Our idea was to use projection mapping and lights to transform the original monument of the conquerors, with definitive and hierarchical roles for each race, proposing a new format to it, something that could inspire Brazilians in the 21th century. Being 43 m long and sited in the middle of a quite large and well lighted avenue, it posed quite a lot of technical challenges. We chose to build a big screen behind the monument, in a way to help us create the final imagery that we wanted for the monument: instead of black slaves pulling a boat inland for crossing between rivers meanwhile a white man stand proudly on his horse, we wanted to have the final image of the installation as all Brazilians equally being on the same boat. In order to achieve this effect we used some of the same resources as we did for the Christ Monument Projection Mapping in 2011: a strong white light aimed at the audience eyes, timecodes synced in the media-server, that would be turned on in certain moments to contract their pupil and together with careful use of projection mapping, would allow us to hide parts of the monument, in plain sight. The 4 minute long projection installation was open to the public for 3 nights as part of the new Sao Paulo Light Festival, and attracted a crowd that would usually watch it 3 or 4 times in a row.

Facade type and geometry (structure) : Monument to the Bandeiras (The Monument to the Flags) is a large-scale sculpture by the Italian-Brazilian sculptor Victor Brecheret (1894-1955) at the entrance of Ibirapuera Park in São Paulo, Brazil.[1] It was commissioned by the government of São Paulo in 1921 and completed in 1954. It commemorates the 17th-century bandeiras, or settling expeditions into the interior of Brazil. (wikipedia)

Kind of light creation : A mix of projection mapping (200 lux) on the monument and white led lights aimed at the audience pupil, all synced on a Coolux Pandoras Box Media server, with timecode being wirelessly sent from both sides of the avenue.

Resolution and transmitting behaviour : Content projected was 30 frames per second, with resolution of 5400 x 1200 pixels, being sent by way of fiber opctics to 7 projectors totaling 170.000 ansilumens.

Pixel distance : 8mm was the size of each pixel.

Urban situation : The monument was erected in the south-central area of the city in the Praça Armando Salles de Oliveira (Armando Salles de Oliveira Square), opposite the Palácio 9 de Julho, headquarters of the Legislative Assembly of the State of São Paulo. The monument, given its size and location, has now become an integral part of the landscape of São Paulo. (Wikipedia)

Description of showreel : Visualfarm is a Sao Paulo based studio that has been one of the pioneers of projection mapping in Brazil, using its large technical expertise to push the boundaries of large scale and innovative approaches in the filed. Visualfarm won a Best Outdoor Instalation award in Infoccom Orlando in 2012 as well as a Cannes award for the Christ Statue Projection Mapping insulation in 2011.

Issues addressed : Sao Paulo inhabitants had a chance to see in a new way the monument, that used to be quite hated and suffered several guerrilla interventions with tagging, paintings and such (these interventions were also addressed in the first part of the mapping). Also, the installation had a place-making quality to it, in a way that attracted pedestrians to come and occupy parts of the square that were mostly surrounded by cars.

Impact : Attracting around 40.000 during 3 nights to watch the projection and achieving high visibility with live coverage by TV networks, the installation helped change the way Sao Paulo inhabitants relate to this monument, also with hight impact in social media. The highly sucessfull installation also helped attracted visitors to the other installations for the Sao Paulo Light Festival.

Tools developed : Optical illusions created by the interaction of projection mapping and light, in such a way that create a statue to gain life by manipulating what the audience can or can not see. Also, the content was all tested and developed using a small scale model of the statue 3d printed from a 3d model created by imagery captured from a drone.

Next steps : Being less than 5 minutes long, we plan to create a second and third act in the same monument, for next year edition of the Festival.