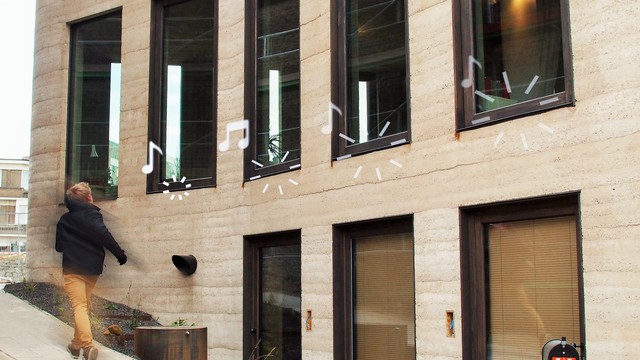 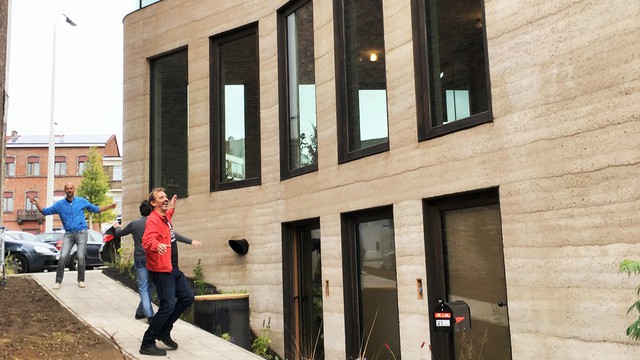 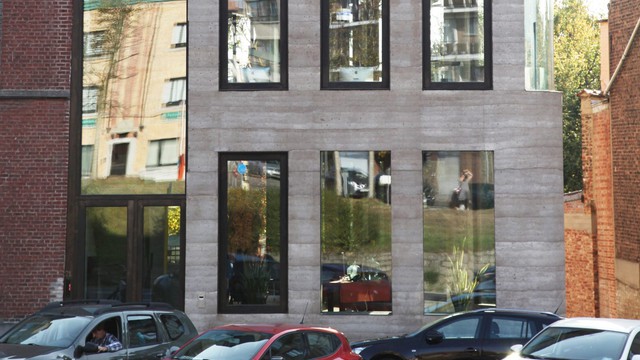 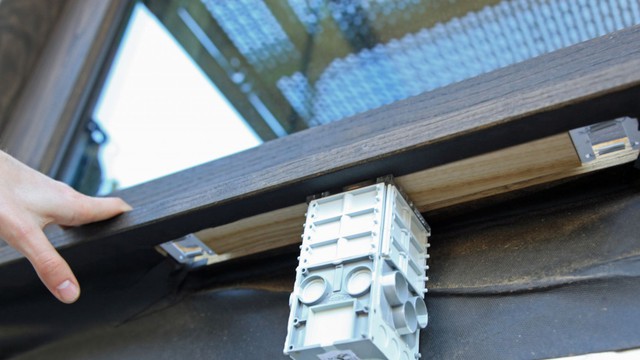 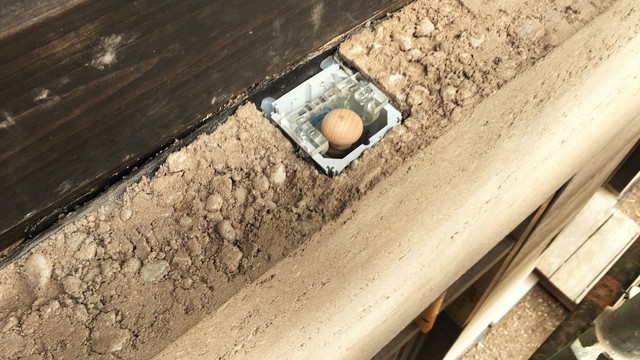 MUURmelaar is an interactive media facade that translates the behavior of passers-by into a dynamic soundscape of intriguing sounds and rhythms. The act of passing through a banal pathway becomes an exciting experience in which passers-by can discover, converse or experiment with or about the architectural experience of the place. As this unique manifestation of media architecture is permanently integrated within the building’s architecture and can be continuously experienced during daytime, MUURmelaar became deeply embedded within the social-cultural fabric of the local neighborhood. What was once a forgotten space, is now part of numerous touristic events and hosts a geocache.

Architectural Experience The concept behind MUURmelaar is deeply grounded in architectural expression and argumentation. The interactive facade contrasts the pulsing busyness of the beltway around Leuven with the perplexing silence and natural quality of a local park close by. As passers-by wander from the beltway to the part, they become surprised by a soundscape of sounds and rhythms that dynamically changes according to the speed and directions of their movements. Casual passers-by stop, look around and inspect the architectural façade. Local habitants and commuters test the hidden functionalities, as a daily playful routing. The architectural experience of the space becomes active, motivating all to discover and experiment with, and even encourages strangers to converse with each other about their interpretations. Permanent Physical Integration The spatial experience is enriched with the dimension of temporality so to augment a wide variety of architectural qualities, such as the used materials, the rhythm of the windows, the scale of the facade, or the semi-private atmosphere of the pathway. The prevalent wooden window frames are reinterpreted as architectural ‘instruments’: each of the seventeen window frames is equipped with a spring-actuated wooden block, which is agitated by an invisible and electronically controlled small physical hammer. A camera hidden in the roof registers the movements of anonymous passers-by from above. These movements are analyzed, which determines an adequate and perhaps surprising response in the form of a playful sequence of sounds generated by the hammers touching the wooden blocks. As such, the overall sound landscape consists of unique and ever-changing combinations of wooden sounds with different tones and rhythms. This installation forms the result of the successful collaboration between the architectural office DMOA and the research group Research[x]Design (RxD) at the Department of Architecture of KU Leuven.

Facade type and geometry (structure) : The architects dismissed lighting or LED displays as they believed these would overpower the subtle material qualities i.e. ‘stamped’ concrete. The intended dynamic media had to be invisible and unobtrusive, yet still be related to the architectural manifestation. The resulting wooden-like tonality can be intuitively interpreted as a materiality that is generated ‘out of’ the architecture itself.

Kind of light creation : The wooden window frames are re-interpreted as architectural ‘instruments’ that can be more authentically actuated, such as by the mechanical hammering motion of a small piston, electronically driven by a solenoid. The overall sound landscape consists of unique and ever-changing combinations of wooden sounds with different tones and rhythms.

Resolution and transmitting behaviour : By trial-and-error the passers-by are invited to ‘discover’ the functionality of the façade. When the basic functionality is understood passers-by can control the actuation of the façade and ‘play’. When people are approaching each other, social interaction is anticipated. If they disperse and stop or don’t socially interact, the soundscape will gradually vanish.

Pixel distance : Seventeen windows are equipped with a spring-actuated wooden block, which is agitated by an invisible and electronically controlled hammer. The multiplication of this actuation over 17 separate windows also allows for the spatial distribution of dynamic rhythms on urban and architectural scale.

Urban situation : The architecture office is situated between the busy beltway of Leuven and the more quiet and peaceful Ruelenspark. A gradually changing urban soundscape characterizes the public passage along the DMOA office. Inspired by this contextual quality, sound was used as a ‘medium’ for the media façade, which would respect the subtle stamped concrete, yet be perceivable enough to facilitate interactions.

Description of showreel : The content of the media façade, or what message it conveys relates to how the building itself communicates with its immediate environment. The responsive character allows the building to manifest itself in the socio-cultural fabric by stimulating social interaction with and between local residents, and by implying and accentuating the curved ‘pull’ movement of the front facade towards the park.