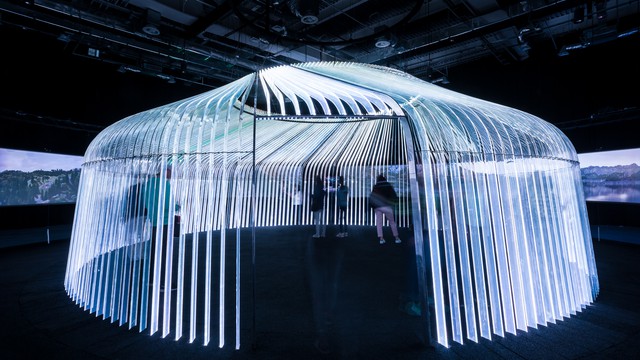 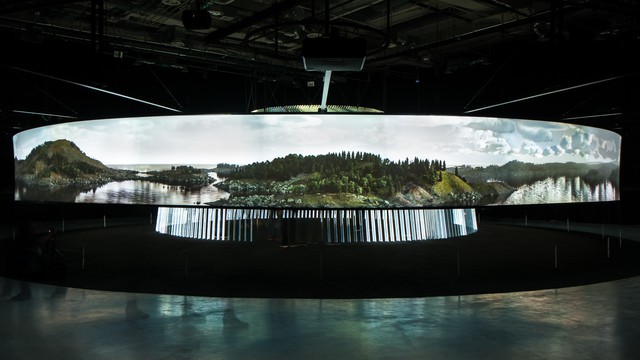 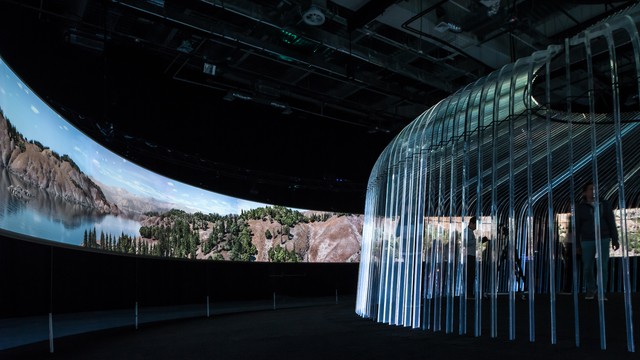 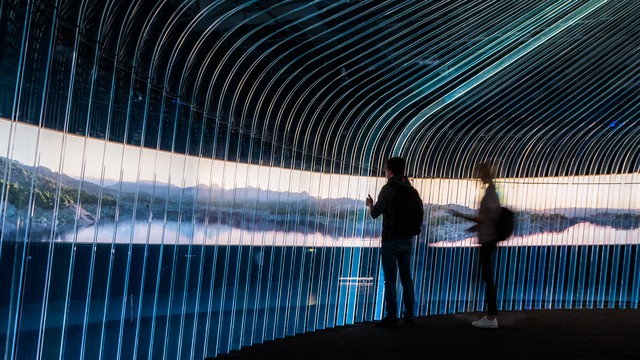 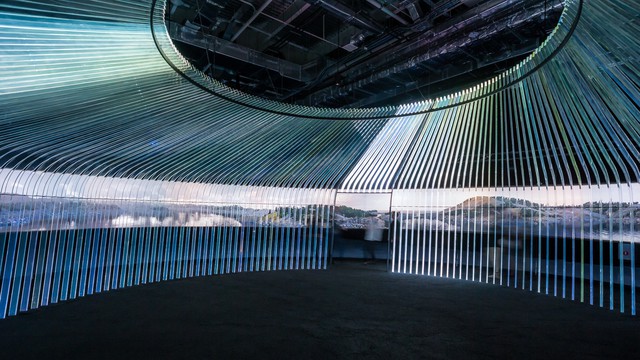 At the heart of the UK pavilion for the Expo 2017 in Astana was a stunning light sculpture inspired by the architecture of yurts. The sculpture represented the timeless connection between human civilisation and our environment. Its transparent spokes responded to touch with illumination, thus creating a playful interaction between the visitors and the surrounding architectural body. This in turn influenced a sixty metre landscape panorama that depicted a living, universal landscape generated entirely by computer. Inspired by the Expo theme of ‘Future Energy’, the UK pavilion explored the origins of energy, taking visitors on the journey from the sun through to the earth’s landscape, its climate, human civilisation and UK innovation.

Inspired by the Astana 2017 Expo theme of ‘Future Energy’, the UK pavilion explored the origins of energy. Beginning with the birth of the universe, it took visitors on the journey of energy from the sun through to the earth’s landscape, its climate, human civilisation and UK innovation. At the heart of the UK pavilion was a stunning sixty metre panorama depicting a living, universal landscape generated entirely by computer. It captured the relationship between the sun, the earth and its climate in incredible detail through virtual day and night and was 40,000 pixels wide. The panorama surrounded a striking centrepiece sculpture inspired by the architecture of yurts, representing the timeless connection between human civilisation and our environment. Its transparent spokes responded to human touch with illumination, which in turn influenced the landscape around it, gently altering its weather in reaction to visitor activity. The light sculpture consisted of two hundred radially arranged spokes of acrylic glass that reached a height of four metres. A light touch was enough to make the them glow. Then, after a few moments, the light faded again. This allowed visitors to enter into an organic exchange with the architectural body that surrounded them. They became part of a diverse play of light that they could design themselves and which was framed by the changing moods of the panorama. An original score by musician Brian Eno unfolded in parallel with this journey. It took visitors from a single tone at the entrance and exit of the pavilion, and built to a continuous, richly layered composition, immersing people as they viewed the landscape.

Facade type and geometry (structure) : The light sculpture consisted of 200 identical, four metres high spokes made of acrylic glass. The spokes were curved at the top and arranged in a circle. Together they formed a shape that is reminiscent of the architecture of the yurt, the traditional round tents of Kazak nomad communities. The panorama was 40,000 pixels wide and had a diameter of 17 metres. 22 projectors were used.

Resolution and transmitting behaviour : The LEDs were located at the lower end of the spokes. They injected light into the acrylic glass, thus making the entire spokes “glow”. An embedded capacitive sensor in the spoke sensed the approach of a human hand.

Pixel distance : The distance from one spoke to the next was fifteen centimetres.

Urban situation : The installation was located inside the British pavilion during the Expo in Astana, which took place from 10 June – 10 September 2017.

Description of showreel : Visitors were able to interact with the installation by touching the spokes of the yurt. A light touch was enough to make them glow, before, after a few seconds, the light faded again. A very subtle light animation linked to the content of the panorama projection ran in idle mode. The panorama projection showed a universal landscape generated entirely by computer.