Chave do Centro or "The Key to Downtown" 2017, Brazil, Sao Paulo

Media art/projection on facade festival take on the task of reclaiming a 3-km long overpass that destroyed urban cohesion of downtown Sao Paulo. 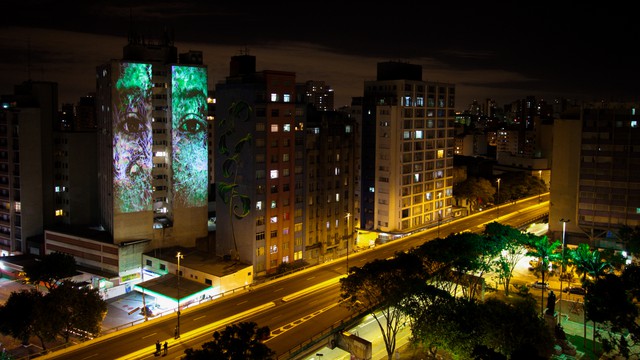 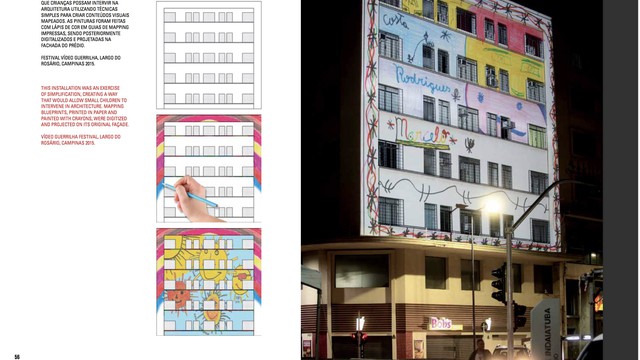 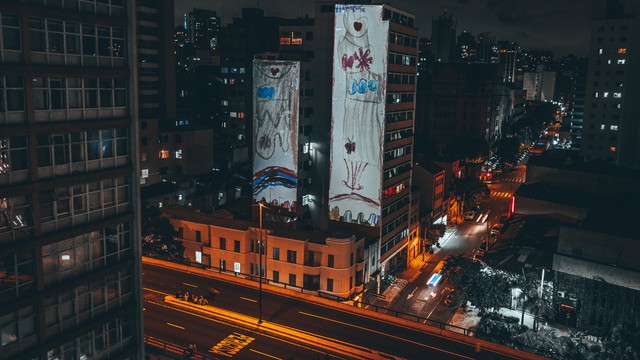 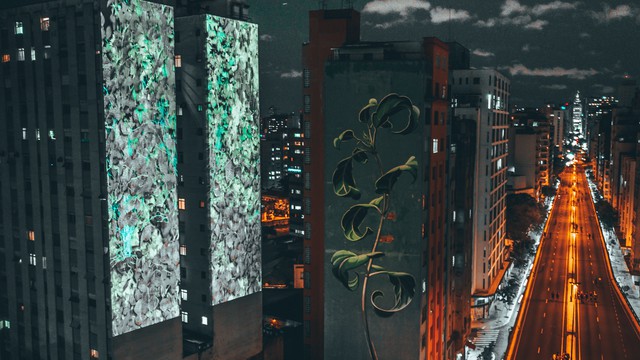 Using a 30 night-long media facade festival in order to attract pedestrians on top of a long overpass that destroyed urban cohesion in downtown Sao Paulo, Chave do Centro was a Visualfarm produced festival that called 4 different artists to help change how people interact with the city during the nightime.

During the military dictatorship in Brazil in the 60s, a 3-km long overpass was built in downtown São Paulo, speeding up traffic between east and west side of town. As a side effect the whole of downtown suffered urban decay, as the noise and pollution increased tenfold in the areas around the overpass, that stayed open for cars 24hs every day and night. Democracy came back in the 80s but it took more 35 years for residents of the neighbourhood to succeed in a campaign to decrease opening hours of the overpass for cars and turn it in a sort of park for pedestrians, in a Jane Jacobs style of fighting against the car agenda. Artist and producer Alexis Anastasiou, a local resident, decided to create “Chave do Centro”, a media art festival that would place 4 installations from 4 different artists along the overpass, in such a way that they would be ideally seen in a walk on the overpass, inviting people to come over at night - while it was closed for cars - and enjoy the light show. Most important of all was that the festival should be on for a long time, 30 days, so that a lot of people from other parts of Sao Paulo would be able to come over and visit the “Minhocao” as a pedestrian for the first time (Big Worm, the nickname given to the overpass by the area residents). The Festival was a great success, attracting lots of pedestrians and media attention and helped raise awareness about the importance of art and a good environment for pedestrians. Shortly after the Festival conclusion, the City Council approved longer hours for pedestrians and now the over pass is open for cars only on weekdays from 7AM until 8PM and it is officially called “The Minhocão Park”.

Facade type and geometry (structure) : The imagens were projected on non treated standard brick building, mostly build during the 50s and 60s.

Kind of light creation : Projection and Projection mapping techniques were used for content creation. One the works also used invited children from the neighborhood to crayon paint in paper printed blue prints of the building facade, in a sort of low-tech projection mapping. Other works used video or 3d modeled and animated content.

Resolution and transmitting behaviour : Each work was around 1920 x 1200 pixels, 30 frames per second content animated content. Media servers and laser projectors were placed inside people's home, helping the project achieve low cost necessary to have the projections for 30 nights.

Urban situation : Minhocão sits now in what is a depleted neighborhood that becomes not so safe at night, specially if theres only a few people walking on the streets. The main goal of the festival was to help change that by creating a artist attraction open to the public during night time.

Description of showreel : We are enclosing a video that documents the works of all 4 artists as well as show reactions from the audience.

Community or communities involved : Associação Parque Minhocão, an activist group that was instrumental in lobbying authorities to increase opening hours for pedestrians in the Minhocão overpass helped finding building for projections and placement for equipment, being instrumental in the organization of the Festival. Most residents and buildings that allowed the use of their real state as projection surfaces or laser-projectos sites did that in a semi-voluntary base.

Impact : Helped convincing authorities and local residents of the possibility of turning a overpass build for cars into a dual-purpose are, opening longer hours for enjoyment and sports and closing it to cars. The overpass becomes a park now, from 8PM until 7AM on weekdays and during the whole weekends.

Tools developed : Relationships and procedures to use private owned real-state as projection sites, interaction between children and media art, use of low wattage laser projectos as a tools that allowed to use of residential electric infrastructure for high performance large-scale projections.

Next steps : Aim to recreate the festival in a longer term, expanding the permanence of installations from 30 nights to 6 months.