Site-specific permanent installation made of LED, metal and programming software/hardware system. Located under viaduct with the purpose to transform the area into safer and presentable area to passers-by and local community. 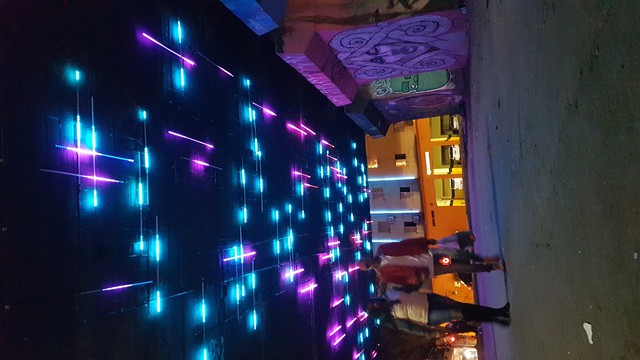 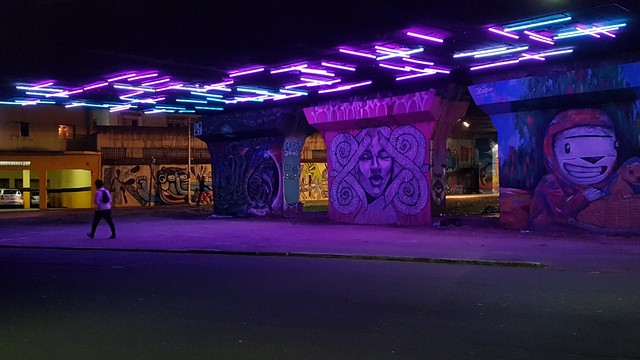 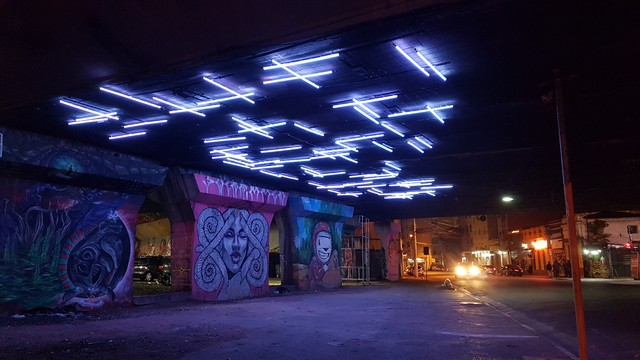 Permanent site-specific LED installation underneath a viaduct (car pass) at São Paulo City downtown area. The artistic urban intervention was implemented with the purpose of modifying the social dynamics of space, promoting the sensation safety through the lighting design integrated in existing urban structure. BioLumen was designed to stimulate the desire on local people to getting around that specific area. The location was chosen by the artist precisely because it is inhospitable and very dark, which despite being a connecting passage of important streets in the neighborhood was avoided by the local community

BioLumen Installation is inspired by bioluminescence: the ability of living beings to emit their own light. Some animals that inhabit dark areas have the ability to generate light through chemical reactions. The installation also relates to the concept of the interference of artificial lighting in the functioning of living organisms. As examples insects, fishes, birds and bats are animals that change their natural habits when exposed to artificial light. In that sense BioLumen instigates people who used to avoid passing under the viaduct suspend their habits in favor of experimenting with a new urban artistic configuration. Composed of addressable LED bars and metal structure, the work was created with the purpose of providing an improvement of the citizen experience in São Paulo city, which has alarming rates of violence and numerous public spaces in a state of abandonment due to insufficient policies over decades. The sensory impact of light awakens curiosity, the sense of security, the desire to hang around the space. This particular area, the pedestrian sidewalk that was previously ignored by public agents and by the community itself, is now in evidence, and stimulates the growing circulation of people. It instigates visual contemplation, the enjoyment of current artistic experience outside the geographical limitations of pre-established cultural spaces. And it mainly alerts the citizen's basic right to circulate safely around the city. BioLumen is a permanent urban media intervention in São Paulo; it works during six hours of major movement in the night period. The installation draws attention to the importance of urban lighting for the formation of flows of people and consequently to the possibilities of social relations and the qualified use of public space.

Facade type and geometry (structure) : The 78 LED bars (of 1.5m each) are fixed on the concreted ceiling coupled by metal grid. The LED bars follow a transverse pattern along the catwalk lightning the path for the passers-by.

Kind of light creation : slow movements combining colors that remit to the tranquil environment, always prioritizing the illumination of space.

Resolution and transmitting behaviour : the total number of pixels distributed in the installation is 3.510. this distribution is done randomly respecting the alignments in the x and y axes

Urban situation : The site counts a large number of crimes due to low light despite its great location being seen as a gateway to a neighborhood with rich nightlife. some homeless live in the place which causes the residents to avoid going there in the evening

Impact : The installation immediately brought a positive impact on the lives of the people living there, as well as the increase in the number of people who use the passage, as well as creating a new meeting place and artistic manifestations.

Next steps : The idea is to try to find new sponsors to create similar facilities in other parts of the city that suffer from the same problem